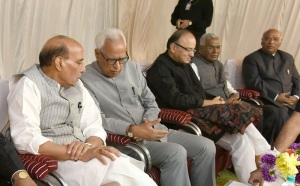 Srinagar/Jammu: During the 2-day long discussions between the All Party Delegation led by Union Home Minister Rajnath Singh and the stakeholders in Jammu and Kashmir, there was a general opinion that perception management of media, specially social media is very important to channelize the energies of the youths in the right direction.

It was emphasised that the media should report on the incidents in Kashmir keeping the larger context in mind. Concern was also expressed on the source of funding of the terror-related activities.

It was further emphasised that rehabilitation of released and surrendered militants is also important and for this purpose the Government also has a scheme.

On concluding discussions in Srinagar, the Home Minister said that all parties have arrived at a consensus that the situation in Jammu and Kashmir should improve at the earliest. He said that the delegation’s talks with the various sections in J&K have been fruitful.

The Home Minister announced that Dr Sanjay Roy from Ministry of Home Affairs (MHA) has been nominated as the Nodal Officer to receive grievances from the people of Jammu and Kashmir. The grievances can be reported, 24×7, on the following phone numbers: 01123092923, 01123092885 and email: dirmjk-mha@nic.in.

This evening, after the All Party Delegation had met people’s representatives and those from different rganisations in Jammu, the Union Home Minister told media-persons that the APD will now meet in Delhi and discuss the issues that came up during meetings with various delegations during its 2-day visit to Jammu and Kashmir.