At least 13 killed in two separate attacks in Pakistan 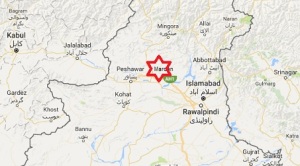 Peshawar: Two bomb explosions outside a district court in the city of Mardan in Khyber Pakhtunkhwa province today killed at least 12 people, including lawyers, police personnel and civilians and wounded more than 50.

The bombs were detonated in the northwestern Pakistan city hours after a couple of gunmen, reportedly belonging to a Pak Taliban faction, had attacked a Christian neighbourhood in the Khyber tribal region, killing at least one security guard and a civilian.