India and Myanmar will cooperate to combat terrorism and insurgent activity: Narendra Modi 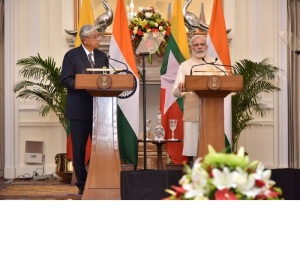 Prime Minister Narendra Modi delivering his statement to media in the joint press briefing with President of Myanmar Htin Kyaw, at Hyderabad House, in New Delhi on August 29, 2016.

New Delhi: Prime Minister Narendrwa Modi today announced that India and Myanmar have agreed to actively cooperate to combat the common challenges of terrorism and insurgent activity in the region.

Modi was delivering his statement to media in the joint press briefing with President of Myanmar Htin Kyaw, at Hyderabad House in the capital today,

Reflecting on his discussions with the President of Myanmar on whole range of bilateral engagement, Modi said: ‘We recognised that our security interests are closely aligned and agreed on the need to remain sensitive to each other’s strategic interests and concerns.

Both countries have agreed to actively cooperate to combat the common challenges of terrorism and insurgent activity in our region, Modi said.

I have also conveyed India’s full support to the peace process initiative under the ‘21st Century Panglong Conference.

The Prime Minister focused attention on Myanmar’s unique position in India’s neighbourhood and said it is a land bridge that connects India with South East Asia. The long standing cultural and historical linkages between our societies form a solid foundation of our ties, he said adding Buddhist principles of metta or loving kindness and Sarva Pantha Sambhava equality of all religions define our ways of life.

The depth of our relationship, Modi said, is shaped by a robust development cooperation partnership, which has a strong “people first” philosophy. India’s nearly 2 billion dollar development assistance is touching the lives of the common man of Myanmar.

Modi underscored India’s engagement, including support to projects in connectivity, infrastructure, capacity building education, healthcare and many other sectors.

Citing some concrete examples of partnership, Modi said, these include:

• Kaladan project, with its port and waterway segment nearing completion later this year;

• Advanced Centre of Agricultural Research and Education; as well as

Two operational agreements signed today between India and Myanmar will facilitate the construction and upgrading of 69 bridges and the Kalewa-Yargi road section of the Trilateral Highway Project.

India is also determined to deepen our cooperation in agriculture, banking, power, and energy.

The MoUs on Cooperation in Renewable Energy and on Traditional Systems of medicine will operationalize cooperation in these areas.

Both sides have also agreed to work towards a long-term and a mutually beneficial arrangement for trade in pulses.

In April this year, India took the small step of supplying power to Tamu in Myanmar. Modi today told the Myanmar President that India is willing to substantially scale up supply of power.