The action by Kajriwal came after he recieved a CD showing Kumar in an objectionable position with a woman. A set of photos showing the axed minister with another woman is also doing the rounds.
Kejriwal removed the minister after his CD had also reached Delhi’s Lt. Governor.

The Haryana Government led by Khattar had appointed a one man judicial Inquiry Commission headed by Justice S N Dhingra in May 2015 to probe all matters relating to the change of land use and grant of license(s) by the State Department of Town and Country Planning to develop residential colonies in Sector 83, Gurgaon. Under probe was also mutation of land deal linked to Skylight Hospitality, a firm owned by Robert Vadra.and DLF

Speaking to media-persons after handing over the report to the Chief Minister, Justice Dhingra said that had there been no irregularity, he would have submiited a one line report and not a 182 page report which carries all evidence and names all those who have committed irregularities and benefited from the land deal.

Justice Dhingra said that the report is the property of the State Government and it is up to the government act on it or decide when it wants to make it public.

The Congress leaders, according to party insiders want the report to be tabled in the Assembly, State Government would be taking legal opinion and the possibility of this case being handed over to the CBI cannot be ruled out.

New Delhi/Lucknow/Chandigarh/Bhopal: The Special Judge(Central), CBI Cases, Lucknow (Uttar Pradesh) has convicted Chandra Bhushan Singh, then Superintendent of Posts, Kanpur (UP) and sentenced him to undergo seven years Rigorous Imprisonment with fine of Rs. 35,000 in a bribery case.

A case was registered against Chandra Bhushan Singh under Section 7 of Prevention of Corruption Act on 18 February 2014 on a complaint alleging that illegal gratification of Rs. 1,50,000 was demanded by Singh from the complainant for appointment of his son as Gramin Dak Sevak. A trap was laid and Chandra Bhushan Singh was arrested while demanding and accepting a bribe of Rs.10,000 from the complainant.

Chargesheet was filed against Chandra Bhushan Singh in the Court of Special Judge(Central), Lucknow on 17 April 2014.

In another case, the Special Judge, CBI Cases, Bhopal (Madhya Pradesh) has convicted Mahesh Bajpai, then Assistant Grade-I, Food Corporation of India posted at Itarsi in Hoshangabaddistrict of Madhya Pradesh and sentenced him to undergo three years Rigorous Imprisonment with fine of Rs.25,000 in a bribery case.

CBI laid a trap on 20 November 2012 and Bajpai was caught red-handed while accepting the remaining bribe amount of Rs.25,000 from the complainant. A chargesheet under Sections 7 and 13(2) read with 13(1)(d) of Prevention of Corruption Act, 1988 was filed against the accused on 27 December 2012 in the Court of Special Judge for CBI Cases, Bhopal.
CBI arrests a Chandigarh Police officer in a bribery case
The Central Bureau of Investigation yesterday arrested a Head Constable posted at Burail Police Post, Sector 45, Chandigarh for demanding and accepting a bribe of Rs.10,000 from a complainant.

A case was registered on 29 August 2016 under section 7 of Prevention of Corruption Act, 1988 against the accuswed Head Constable posted at Burail Police Post, Sector 45, Chandigarh.

The complainant has alleged that the accused was demanding bribe of Rs.10,000 for not taking action against him in a complaint related to a money dispute. The CBI laid a trap and caught the Head Constable red handed. The role of another official is being looked into during investigation.

Searches were conducted at the residential premises of the accused which led to recovery of about Rs.80,000 in cash and documents relating to property. A dozen-and-half bottles of liquor were also found at the residence of the accused and the matter was referred to local Police for appropriate action.
Seven years simple imprisonment to former chairman of IFFCO

The Court also ordered that out of the total fine imposed, 25% amount be paid to CBI towards litigation expenses.

This case relating to securities scam, involving Harshad Mehta, was registered by CBI in 1993. It was alleged that S. S. Kadian in conspiracy with the officials of UCO Bank and other private persons had invested the surplus funds of IFFCO at lower rate of interest and caused a loss of about Rs. 1.5 million to IFFCO. Out of the total amount of investment, a tranche of about Rs. 40 million was fraudulently diverted to the personal account of accused Harshad Mehta who expired during the pendency of the case. 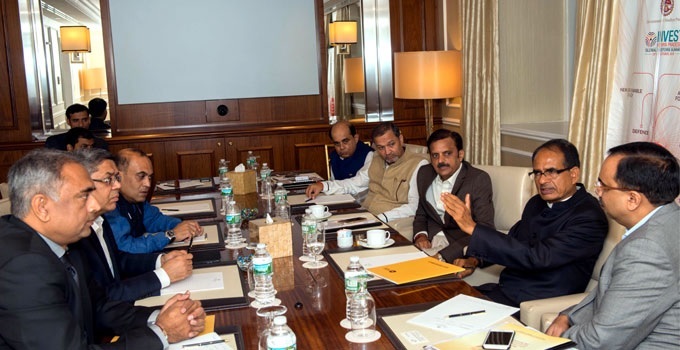 New York: Coinciding with the second India-US Strategic and Commercial Dialogue (S&CD) in New Delhi which was joined by India’s Minister for External Affairs Sushma Swaraj, Minister for Commerce and Industry Nirmala Stharaman, US Secretary of State John Kerry, Secretary of Commerce, Penny Pritzker, Cyrus Mistry of the Tata Group and David Cote of Honeywell, the Chief Minister of Madhya Pradesh Shivraj Singh Chouhan began the third day of his US visit on Tuesday by reaching out to the captains of industry and inviting them to become partners in the industrial development of Madhya Pradesh.

Interacting with investors and CEOs of US companies in New York on Tuesday, Chouhan said that Madhya Pradesh has become a fast track State when it comes to industrial development and all necessary infrastructure is being developed to accelerate industrial growth and promote new industries in 20 new industrial areas in the State.

Speaking of visible change in the overall scenario over the last one decade, the Chief Minister said that Madhya Pradesh has become the first choice of investors. He said that the State Government treats investors as partners in the process of development. Minister for Industries Rajendra Shukla and senior officials were present.

Welcoming investors to Madhya Pradesh, Chouhan assured them that there would be no hurdles in their way. The State Government intends to give the young manpower opportunities of growth through industrial development. For achieving this goal, they are being equipped with skills and are also being oriented for entrepreneurship.

Chouhan invited the prospective investors to the Global Investors’ Summit to be held at Indore later in October this year.

International Research Laboratories Pvt. Ltd. is willing to expand its operation in the State to address cataract blindness as a key player in the global blindness eradication campaign ‘Help Me See’.

RMC, USA, which deals in building materials for the construction of residential and commercial supplies also showed interest.

American Association of Physicians of Indian Origin – held discussion on widening its network in Madhya Pradesh.

The Chairman of US India Business Council Mukesh Aghi met the Chief Minister and discussed the future strategies to enhance bilateral trade between US and India.

The Council was formed for trade collaboration between The Governments of the US and India. The India-US business ties is a leading business consulting organization. The USIBC is the largest bilateral trade organization, which includes representatives of the American and Indian companies.

Addressing the ‘Friends of MP’ Forum, Chouhan said that Madhya Pradesh Government is seeking value-based citizen participation. This initiative, he said intends to bring at one place knowledge, expertise and people. It helps NRIs to stay connected to their homeland. Also, it serves as a useful platform where friends of Madhya Pradesh and policymakers can join hands.