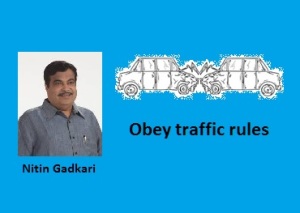 New Delhi: To make the Indian roads safe and reduce the incidence of road accidents, a new Motor Vehicles Bill will be introduced in Parliament soon.

This was announced by India’s Minister of Road Transport & Highways and Shipping Nitin Gadkari today. He has also appealed to the people to obey traffic rules and exercise utmost care and caution on the roads.

In a statement gadkar said that people should not drink and drive. They should also stop violating traffic rules. The appeal has come in the wake of the growing number of road accidents and related fatalities in the country.

The Minister said that the growing number of road accidents in the country is a matter of grave concern, and it is extremely sad that so many innocent lives are lost everyday due to these accidents. The Minister reiterated his commitment to bring down the number of accidents and related fatalities and said that his Ministry is working in earnest towards this end.

According to the Minister, 726 black spots have been identified and work is on to rectify these. Rs 11,000 crore will be spent on this work. Crash barriers are going to be installed in hilly terrains like Himachal Pradesh. A Group of Ministers is working on recommendations to make Indian roads safer. This will pave the way for introducing a new Motor Vehicles Act in the Parliament soon. The Minister also informed that 10 % of the CRF funds given to each state is to be used for identifying black spots on state and other highways. He called upon state governments to send proposals for the same. He also said that NGOs have also been roped in to create awareness on the subject.

Gadkari has said that the government alone cannot ensure safety on roads, and has appealed to people to do their bit by obeying traffic rules and helping create awareness on this issue.