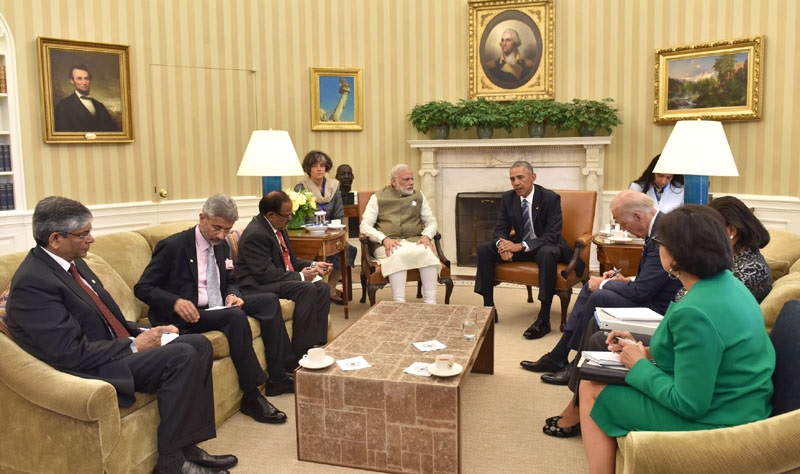 Marking their third major bilateral summit, the leaders reviewed the deepening strategic partnership between the United States and India that is rooted in shared values of freedom, democracy, universal human rights, tolerance and pluralism, equal opportunities for all citizens, and rule of law.

Both leades pledged to pursue new opportunities to bolster economic growth and sustainable development, promote peace and security at home and around the world, strengthen inclusive, democratic governance and respect for universal human rights, and provide global leadership on issues of shared interest.

The leaders welcomed the significant progress made in bilateral relations between India and the United States during their tenure, in accordance with the roadmaps set out in the Joint Statements issued during Prime Minister Modi’s visit to the United States in September 2014 and President Obama’s visit to India in January 2015.

The leaders affirmed the increasing convergence in their strategic perspectives and emphasized the need to remain closely invested in each other’s security and prosperity.

The joint statement released on Tudesday after the bilateral meeting between Modi and Obama, underscores the advancing U.S.-India Global Leadership on Climate and Clean Energy

FACT SHEET: The United States and India – Moving Forward Together on Climate Change, Clean Energy, Energy Security, and the Environment