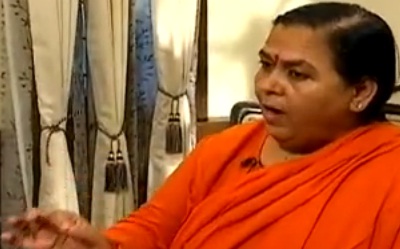 New Delhi: Union Minister of Water Resources, River development and Ganga Rejuvenation Uma Bharti has written a letter of protest to NDTV boss Prannoy Roy, pointing out that a small portion of a long interview she had given to Sreenivasan Jain was being shown repeatedly on TV to damage her image and also that of the the Modi-led NDA Government.

The Minister has said that a small sentence she spoke during the NDTV interview has been picked and presented wrongly. “By doing this do not  malign my and our Government’s image”, she has said reiterating that Prime Minister Narendra Modi has given instructions that all preparations be made to combat the drought situation and her Ministry is working with full devotion in this direction.

While observing that NDTV is a respected news channel, Ms. Bharti has said in her letter that anyone watching her full interview would acknowledge that she never said ‘Drought Is An Event For Which Its Pointless To Plan In Advance’.