Home › India › Resources should be diverted to the villages for development in true spirit of the Constitution: Narendra Modi

Resources should be diverted to the villages for development in true spirit of the Constitution: Narendra Modi 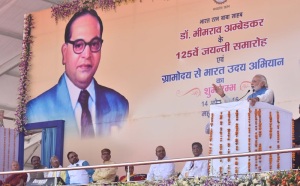 To complete the process of inclusive development, all resources must be diverted towards the villages as peacemeal development will bot serve any purpose, the Prime Minister added.

Prime Minister Modi was addressing a massive public gathering to mark Dr. Ambedkar’s 125th birth anniversary at Ambedkar Nagar (Mhow) near Indor in Madhya Pradesh. On this occasion, he launched the ambitious ‘Gramoday Se Bharat Uday Abhiyan’ (Campaign to usher in all round progress through the progress of villages)

Modi said that he has come to pay obeisance to Baba Saheb Dr. Ambedkar. He congratulated the Madhya Pradesh government led by Shivraj Singh Chouhan for developing Dr. Ambedkar’s birthplace on a grand scale.

Complimenting the Madhya Oradesh Chief Minister for the roadmap to double farmers’ income the prime Minister said that the farmers demand nothing. Only if they can get adequate water, they can produce gold from soil. A farmer is satisfied if he is able to feed others. He said that a resolve has been taken to double farmers’ income by year 2022. The work is difficult, but will be accomplished. He said other states should take a cue from Madhya Pradesh and chalk out an action plan in accordance with their resources for ddevelopment of villages. Urban economy will not grow untill we increase the villagers’ purchasing power, Modi added.

Modi said that Baba Saheb devoted all his life to struggle to ensure respect and a life of dignity for the deprioved sections.

The Prime Minister reiterated his Gpvernment’s commitment and said all villages in the country will be electrified within 1000 days.

Referring to ‘Gramoday Se Bharat Uday Abhiyan’, the Prime Minister said that 90 lakh families have given up subsidy on LPG in favour of poor families. One crore LPG connections were given during one year in the history of India. The Prime Minister said that 5 crore more families will be benefited in next 3 years. He said that the poor families are forced to approach chit fund companies when they need cash. Now, all poor families have joined the national mainstream of financial inclusion through Pradhan Mantri Jan-Dhan Yojana and have got economic security.

Modi urged the villagers to become partners in transformation and make full use of government’ schemes. He concluded his speech with the slogan ‘Jay Bhim’. Chairman of Ambedkar Memorial Society, Indore Bhante Sanghsheel presented the book ‘Dhamma Pad’ to the Prime Minister. Modi complemented Indore district for becoming open defecation free and said that now every district will make efforts in this direction.

Chief Minister Shivraj Singh Chouhan said that Narendra Modi is the first Prime Minister of India who has come to pay his tributes at Baba Saheb’s memorial. People of Madhya Pradesh take pride in the fact that Baba Saheb was born here. He expressed gratitude towards the Prime Minister for developing 5 memorials associated with Baba Saheb as Panchtirth. He said that previous governments could not do this.

Referring to innovative welfare schemes for Scheduiled Castes and Scheduled Tribes, the Chief Minister said that houses will be given to families that do not own a house. He said that it was dream of Baba Saheb that society becomes educated. Fulfilling this dream, education facilities have been expanded in the state. As a result, 117 SC/ST students have succeded in taking admission in prestigious institutions like IITs and IIMs last year. Their tuition fee is also being borne by the state government. Similarly, the state government will also pay the fees of students taking admission in engineering and medical colleges. The state government also gives adequate assistance to students going abroad to pursue their studies.

Speaking on the occasion, Union Minister for Social Justice Thawarchand Gehlot said that 190 countries as well as United Nations are celebrating Baba Saheb’s birth anniversary. He said that inclusive philosophy is necessary for world peace. He informed that a decision has been taken to observe April 14 as “Samrasta Divas” (harmony day) and Constitution Day on November 26.