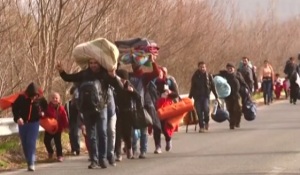 The agreement reached Friday (18 March 2016) between the EU and Turkey on responding to the massive influx of refugees and migrants in the region, comes into force from today (19 March 2016).

Experts, who have studied the contents of the agreement have expressed deep doubts about the legal aspect of this agreement in terms of international law. German Chancellor Angela Merkel, who has continued to champion the cause of the refugees and whose government has even funded an explicitly illustrated website that teaches migrants how to have sex, including prostitution and casual sex in 13 different languages obviously to help in their easy assimilation, said after the agreement was formalised that she has no illusions that what has been agreed will be accompanied by further setbacks and there are big legal challenges that would have to be overcome.

More than two dozen EU leaders behind the deal with Turkish Prime Minister Ahmet Davutoglu were in agreement that Turkey would receive concessions – both financial and political (including speeding up of the process for granting EU membership) and this would be quid pro quo for taking back all refugees who had taken the sea route and crossed over to the Greek islands illegally from Turkey.

Besides Merkel of Germany, who has expressed apprehensions about the fate of the refugees if they are returned to Turkey with a poor track record vis-a-vis human rights, Belgian Prime Minister Charles Michel has his own apprehensions “An agreement with Turkey cannot be a blank cheque,” he observed. The Belgian leader’s statement reinforces the assertion of those who feel that the deal between the EU and Turkey is only to please a section of the anti-refugees in Europe.

The US, which is the single largest factor responsible for the disastrous situation in Syria, rise of ISIS and genocide in the region and the unprecedented refugee crisis, views Friday’s agreement as an important step on responding to the flow of refugees and migrants in the region. Appreciating the Turkish efforts in “generously hosting” more than 2.7 million refugees from Syria, US Secretary of State John Kerry said in a statement that the United States has an abiding interest in the welfare of refugees and migrants, including those who are risking their lives in a desperate attempt to find safety and opportunity in Europe. We commend language in the agreement affirming that all refugees deserve access to protection and which makes clear the agreement will be implemented in full accordance with EU and international law.

The US has endorsed action to shut down the illegal smuggling operations that prey on and exploit vulnerable migrants, Kerry said adding these actions will be key to the success of this agreement, along with rapid registration and processing of asylum claims, humane handling of migrant returns, and quick provision of promised support to Greece and Turkey.

The US has also appreciated the solidarity among EU member states in meeting their commitments to share in the responsibility of formal relocation and resettlement of asylum seekers and refugees.

Turkey’s role in the rise of ISIS has been under attack especially after Russia rolled out evidence that Turkey is the culmination point of Islamic State’s illegal oil trade. Turkey also played a major role in flaring up the Syrian crisis by sheltering and providing base to the rebels fighting the regime of President Bashar Assad in Syria with many of their factions later defecting to the ISIS.

Given the US patronage to Turkey and also its stakes in the Syrian crisis, it is obvious that the EU agreement with Turkey has been deftly handled and tailored to give some credibility to Turkey, which has been slapped by Russia with evidence for helping the ISIS in the illegal oil trade. The clause to return the refugees and migrants to Turkey will silence the anti-refugee nationalists in Europe at least for the time being but given the presence of ISIS and the genocide and atrocities on members of religious groups in the Middle East, question remains how and when it will get implemented.