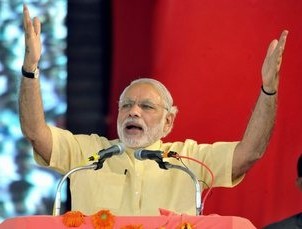 New Delhi : Prime Minister emphasized on labour reforms through consensus building and consolidation of labour laws, and assured progress on the reform path while assuring central trade unions to have faith in the ‘minimum government, maximum governance’ motto of his government. PM Modi was speaking at the inagural function of a newly-constructed building of ESIC Medical College and Hospital at Coimbatore. He used this platform as an opportunity to convey his government’s intent and calm the agitated nerves of central trade unions. Speaking at the inaugural ceremony on Tuesday, Modi re-emphasized that his NDA-led union government was engaged in carrying out labour reforms through consensus and dialogue with stakeholders including workers, without compromising on their genuine protections and rights.

Central trade unions have been building on their campaign against labour reforms and have scheduled to carry out a day-long nationwide strike on March 10. The protest focuses on central government’s labour policies, and the strike is a mode of showing disagreeance to central and state government’s policies labelled as ‘anti-worker’ by the trade unions.

PM Modi, speaking on the backdrop of such an unrest among trade unions, said — We are progressing on the reform path by building consensus on these reforms through extensive stakeholder consultations with employers, worker s representatives, and state governments. Keeping in mind our commitment to ‘minimum government, maximum governance’, the ministry is simplifying central labour laws by consolidating the existing 44 laws into four labour codes, namely — on wages, industrial relations, safety and security, and health.

PM Modi sounded hopeful and stated that the government was confident about these reforms, and expected a considerable increase in ease of doing business due to such a progressive step. Additionally, he said, this consensus-building strategy for strong labour reforms would facilitate job creation, without compromising on the genuine protections and rights available for workers.