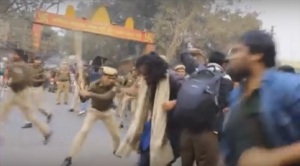 A three-day old video released by the Aam Aadmi Party (AAP) that is now viral on the social media shows policemen brutally hitting students, including ladies, with lathis (batons). Many protesters also received blows with fists. The students were protesting outside the Rashtriya Swayam Sevak Sangh (RSS) headquarters here against the death of Dalit scholar Rohith Vemula.

The brutal and unabashed attack on unarmed students protesting in New Delhi by the Delhi police is a reminder that totalitarism and totalitarist attitudes are still very much alive….. in the world’s biggest democracy……Yes, the cops knew that they were being filmed and did not for even a minute show any kind of restraint in beating up several students…..When the law is broken by any citizen, the reaction of the police in a normal democracy would be proportionate to the violation……but not in this instant case. All the guys involved in the collective bashing have no place in the police force…. and it would be to the honour of the police if it got rid of such bad elements that dishonour the uniform. A Parliamentary panel should hold an enquiry into this specific incident and all those involved should be suspended pending the results. We cannot accept these methods of keeping the peace.