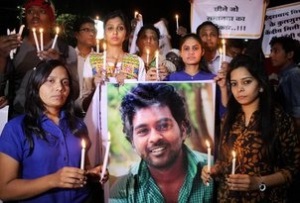 Hyderabad : The suicide of Dalit student created a war of words in political galleries and made leaders from different parties take stand on the matter. Leaders made visits to the city and took cognizance of the situation, both from ruling as well as opposition wing. Fresh protests today rocked the Hyderabad Central University over the alleged suicide of a Dalit student, even after visits from several politicians who headed to the city including YSR Congress leader Y S Jaganmohan Reddy and CPI(M) leader Sitaram Yechury. Reddy and Yechury are scheduled to meet the protesting students of the University today.

Protests today resulted in a group of students carrying placards and raising slogans protested in the tense University campus this morning. The protests spread across different cities besides Hyderabad across the country including in Delhi, Mumbai, Pune and Chennai and these cities were rocked by protests yesterday.

Suicide by dalit student Rohith Veluma has catapulted into a major issue with BJP’s rivals demanding the removal of Union Ministers Smriti Irani and Bandaru Dattatreya, accusing them of being responsible for the death. Vice President of Congress party, Rahul Gandhi led the multi-party charge on Tuesday attacking the government and the Vice Chancellor Appa Rao, saying, ‘The VC and the Union Ministers in Delhi have not acted fairly. This youngster was put in so much pain that he had no option but to kill himself.’

Various political parties and leaders have blamed Labour Minister Dattatreya’s letter of Aug 17 written last year to Irani. The letter was pertaining to seeking action against the ‘anti national activities’ of a students union and the alleged assault of an ABVP leader and a series of five communications from the HRD Ministry (between Sept 3 and Nov 19) demanding follow up action for the suicide. The HRD ministry, however, has rejected all such allegations. It is denying having put any pressure on the University relating to either suspension of Rohith or keeping him out of the hostel. HRD ministry had written as many as five letters to Hyderabad University on Labour Minister Bandaru Dattareya’s complaint regarding ‘anti national activities’ on the campus and the “violent attack” on an ABVP leader but maintained it was standard procedure on such ‘VIP references’.

HRD Ministry spokesperson Ghanshyam Goel said — According to the procedure, if there is a VIP reference, it has to be acknowledged in 15 days and another 15 days may be taken to reply to it. Since no response was coming from the University, the Ministry had to send reminders.

Questions have been raised about the HRD ministry’s five letters, which have been blamed as one of the major reasons for the suicide of Rohith Vemula, a Dalit student, which has grown into a massive political row.