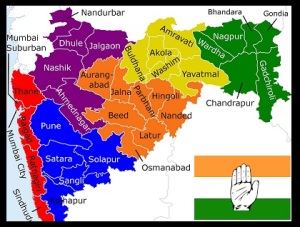 Mumbai : The results of Municipal Council polls, Nagar Panchayat polls and bypolls for a total seat count of 345 wards held all across the state of Maharashtra has managed to put Congress party on top of the winning stack, as Congress managed to register an impressive performance and bring more that 100 seats into its kitty. Congress registered an impressive performance, leading the seat tally by winning in 105 wards in the municipal council and Nagar Panchayat polls and bypolls for 345 wards held across Maharashtra. The other contenders, namely – NCP, Shiv Sena and BJP finished second, third and fourth in the overall seat tally.

The results of polls held on Sunday were declared late yesterday. The central government major, BJP, had to be content with only 39 seats, finishing fourth in the overall seat tally. Final tally read — Congress on the top with 105 wards, followed by the NCP that won 80 wards and Sena that bagged 59 wards. Polls were conducted in Raigad, Nandurbar, Ahmednagar, Nanded, Osmanabad, Hingoli, Washim and Chandrapur councils and nagar panchayats. By-elections were held in Ratnagiri, Jalgaon, Latur, Yavatmal, Wardha and Bhandara. BJP faced a major setback at two seats, one — Jamkhed in Ahmednagar district, which is the home turf of Minister of State for Home Ram Shinde, and, the other — at Chandrapur, which is represented by Finance Minister Sudhir Mungantiwar.

Congress-NCP leaders described the outcome as a reflection of the people s disillusionment with the ruling party. Declareing it as an anti-incumbency upon BJP-led central government’s initial years, leader of Opposition in the Legislative Assembly Radhakrishna Vikhe-Patil said — The results show the people’s confidence in the Congress is back and that people are disillusioned with the BJP led regime.

Leader of Opposition in Legislative Council Dhanajay Munde of NCP added — The results show failure of the BJP-Sena-led government in Maharashtra.