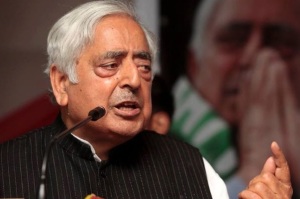 New Delhi : Jammu and Kashmir Chief Minister Mufti Mohammed Sayeed died this morning at the All India Institute of Medical Sciences (AIIMS), where he was admitted for the past 15 days and was undergoing treatment. The Chief Minister breathed his last around 7.30 AM this Thursday.

Sayeed, 79, is survived by his wife, three daughters including PDP President Mehbooba Mufti, and a son. The mortal remains of the departed soul would be flown to Srinagar where the body would be kept for people to have the last glimpse of their leader, and pay their homages. Later, he would be, most likely, be buried in his ancestral village in South Kashmir.

An ailing Sayeed was admitted with complaints of fever and neck pain in the year end that went by. he was hospitalized on December 24 as doctors at AIIMS diagnosed him to have sepsis, decreased blood counts and pneumonia.Under constant monitoring and care, he was kept in the Intensive Care Unit of AIIMS. However, with passing time, during hospitalization his platelets’ count had dropped dangerously low. In the last few days of his survival, the Chief Minister had to be kept on a ventilator.

Sayeed took over as chief minister of PDP-BJP coalition on March 1 last year. Leaders from centre and state have begun to pay their condolences. Union Home Minister Rajnath Singh met the family of Sayeed in hospital and extended his heartfelt condolences to the family.

Prime Minister Narendra Modi today condoled the death of Jammu and Kashmir Chief Minister Mufti Mohammad Sayeed, saying his demise leaves a huge void in the nation. He tweeted — Mufti Sahab provided a healing touch to J&K through his leadership. He will be missed by all of us. Condolences to his family & supporters. What stood out about Mufti Sahab was his statesmanship. In his long political journey he won many admirers across the political spectrum…. leaves a huge void in the nation and in J&K, where his exemplary leadership had a major impact on people’s lives”.