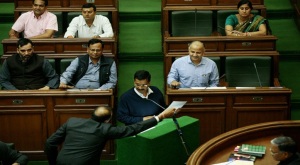 New Delhi : Delhi government bureaucrats today went on mass leave to protest against the suspension of two DANICS-cadre officers. The protest got a negated response from the Union government as Home Ministry declared the suspension as null and void. The issue gained momentum, as, a day after two senior civil service officers of the Home Department were suspended by the AAP government for refusing to sign on a Cabinet decision file, around 200 DANICS officers went on mass leave while 70 IAS officers took off to half-day leave, showing solidarity with the suspended officers. The case in point — action was taken against Yashpal Garg, special secretary (Prosecution), and Subhash Chandra, after they refused to sign a file pertaining to the Cabinet decision to increase salary of public prosecutors.

As per the rule book of civil services, Delhi, Andaman and Nicobar Islands Civil Service (DANICS) are selected through civil service exams conducted by Union Public Service Commission (UPSC). The power of their suspension or taking up of any such action rests solely with the Lt Governor. Only the Delhi Lt Governor can suspend DANICS-cadre officers with permission from the Union Home Ministry.

Reacting to the protest, Delhi Home Minister Satyendra Jain said DANICS and IAS officers do not have the right to go on strike as it is against their service rule. Not taking cognizance of the state of affairs of these officers, and their ultimate step of protest via absenteeism today, in the likes of IAS and DANICS officers associations’ decision to skip work today, Jain said, ‘People will be happy if they go on strike. All system pertaining to governance is based online today and government will not suffer.’

The Delhi Home Minister further said that Delhi government was ready to grant all officers even one month or 15-day leave if they apply for the same. He spoke, ‘The two officers were suspended for not implementing Cabinet decision on December 28. If they had any problem with my order, they should have approached Chief Minister not LG. Lt Governor has already asked officers to defy government decision. I know that by the evening, LG will declare the suspension of two officers by Delhi Government as null and void.