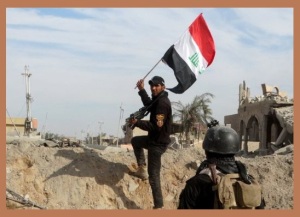 Syria : Iraqi forces have retaken a former government compound in Ramadi from where Islamic State (IS) group militants had been fighting back and strongly resisting an army offensive, according to military reports from the region under attack. The military spokesman confirmed the victory and clarified that the complex was ‘under complete control’ now and there were no traces of existence of any IS fighters within the reclaimed territory. He also added that this regain star-marked the defeat of IS in the city on a major way, and whatever remained, could well be categorized as presence of just tiny pockets of resistance.The government had been making strong attempts to try and retake Ramadi for weeks, and finally succeeded in the final attempt.

In the recent time-frame of past days and weeks, troops have been venturing precariously into the booby-trapped streets and buildings, all the while trying hard to gain ground towards the city centre, meanwhile seizing several districts and disbanding several resist areas on the way. The final Ramadi encounter went around sniper attacks from opposing sides, and, as soon as sniper fire from the compound stopped and aerial surveillance detected no human activity, Iraqi soldiers moved in and took total control.

The military spokesman, Sabah al-Numani, told Reuters — The complex is under our complete control, there is no presence whatsoever of [IS] fighters in the complex. By controlling the complex this means that they have been defeated in Ramadi. The next step is to clear pockets that could exist here or there in the city.

Getting hold of this former government compound appears to be a key victory towards retaking Ramadi as a whole, for which, Iraqi soldiers have begun to slowly clear the site and are combing the entire complex for any hidden attacks, as they fear it may have been rigged to explode. Troops are also doing a strong surveillance of the surrounding neighborhood, where pockets of resistance remain.

The authorities have marked this week’s offensive as a success, and are satisfied with the success at Ramadi, which has been an outcome of continuous efforts over many months which passed by, to mount this ground campaign, in co-ordination with coalition air strikes. There have been no clear indications of the number of IS militants who had been defending the city, although some reports put it at about 400. No official toll of Iraqi army casualties has been released as such.