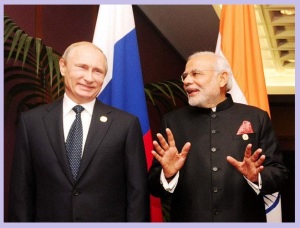 New Delhi : Prime Minister Narendra Modi will set off to Russia today on a first bilateral two-day visit after taking up the office of Prime Minister. The visit, in the schedule of annual summit talks with President Vladimir Putin, would be PM Modi’s big ticket agenda which would revolve around central themes like defence, economy and terrorism. PM Modi expressed his optimism on this visit and stated, ‘Today I will commence my visit to Russia, my first bilateral visit after we formed the Government. I am very optimistic about the outcome of this visit. History is witness to the close ties India and Russia have had over the decades. Russia remains one of India’s most valued friends in the world. My mind goes back to 2001. I had just assumed charge as Gujarat CM and had accompanied Atal ji to Russia. This was, perhaps, one of the first India-Russia annual Summits, a practice that goes on till date. ‘

As the schedule has been finalized for the interaction between the leaders of both countries, it has been crafted around events like dinner, talks, agreements and PM’s favorite Indian-diaspora address in Moscow. PM Modi stated, ‘My visit will deepen the cooperation between India and Russia in the economic, energy and security spheres. We also want to increase cooperation in science and technology, mining among other sectors. Trade ties between India and Russia can increase even further, to benefit not only our two nations but also the world. The visit will witness extensive deliberations with President Putin. There will be an interaction with Russian businesspersons to invite them to invest in India. I will also attend a ‘Friends of India’ program. I am certain that this visit will substantially take forward the already strong people to people ties between our nations.’

The agenda sketches out thus — Wednesday calls for a Dinner hosted by President Putin for Indian PM Modi. Thursday highlights would be talks, meeting and interaction between the two leaders, resulting in signing of key agreements on defence and nuclear energy. This day would also stand witness to PM Modi’s address to around 3,000 members of the Indian community at Expocentre in Moscow.

This Tuesday, a day prior to his departure, PM Modi, in a Cabinet Committee meet on on Security, shortlisted a couple of likely deals to be signed during his Russia trip. It may be recalled that Russia and India would go ahead in jointly manufacturing of 200 Kamov-226T helicopters — a major ‘Make in India’ step in defence sector. Defence Ministry had earlier announced about possibilities of India looking towards leasing a second nuclear submarine from Russia. Last week, the Ministry cleared the purchase of Russian S-400 Triumf air defence missile systems at an estimated cost of Rs. 40,000 crore.

The liquid currency of oil too features in the agenda, as India, the third largest oil importer after the US and China, had been pushing for greater involvement in major gas and oil exploration projects in Russia. Russia is one of the top oil producers globally and has huge reserves of natural gas. Foreign Secretay s. Jaishankar informed media on Tuesday — We expect to sign a number of agreements covering a very broad range of fields. Final touches are being given on some of them.

As stated above by PM, expanding economic ties is also an essential ingred in the discussion table, which would be strengthened by CEOs meeting each other from both countries. Hoping to escalate a trade turnover between both countries, India, whose current bilateral trade with Russia stands at $10 billion, aims, with support from Russia, to escalate it upwards and enhance to $30 billion over a decade.