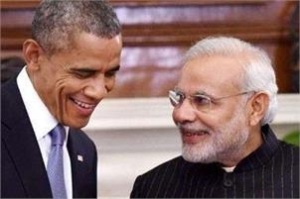 Washington, DC : US President Barack Obama and Prime Minster Narendra Modi spoke over telephone yesterday and shared their personal commitment towards climate change. During their telephonic conversation, as read out from the textual transcript of the discussion by White House, both leaders emphasized their ‘personal commitment’ to secure a strong climate change pact this week.

Obama called upon Modi in the backdrop of climate summit to discuss the ongoing Conference of Parties (COP21) at Paris. PM Modi took the opportunity to personal convey his condolences for the loss of lives in California shooting last week. Moving ahead in their talks, when focus returned to the objective of the tinkle talk, as stated by White House — Both leaders emphasised their personal commitment to secure a strong climate change agreement this week and their interest in both countries’ working together to achieve a successful outcome. .

White House Press Secretary Josh Earnest told reporters that US President was closely following the developments in Paris where more than 180 countries were trying to hammer out a deal on climate change. A day earlier, Obama had spoken with his Brazilian counterpart. Yesterday, came India’s turn. Earnest shared with media — I can tell you that earlier today, the (US) President placed a telephone call to Prime Minister Modi of India to discuss the ongoing negotiations. I would anticipate that over the course of this week as the negotiations continue, the President would be in touch with other world leaders. The Press Secretary also mentioned that Obama was getting regular updates from his team in Paris about the status of the negotiations. He added the US President was optimistic about the success of the Paris summit, and, America looked up to the international community towards taking extra steps in mobilizing and moving forward in the lines of making significant commitments to cut carbon pollution.

Earlier, last week, in Paris, Obama had met Modi on the sidelines of the climate change summit. He had also met his Chinese counterpart Xi Jinping.