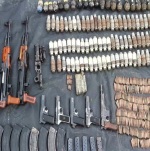 Srinagar : Security forces have busted a militant hideout and confiscated huge quantity of arms and ammunitions in Poonch district of Jammu and Kashmir. The force received inputs of arms cache stacked up in the hideout within Poonch section of J and K state. Authentic intel made the army personnel track down exact location of stacking of arms, which had been kept under a hideout in the intimated area. Acting on specific information, a joint operation was launched by Rashtriya Rifles and Police in the general area of Rajada forest last evening in which a militant hideout was busted.

The recoveries from the hideout, include one AK-56 rifle with a magazine and 550 rounds, one Under Barrel Grenade Launcher (UBGL), two UBGL grenades, one pistol with three magazines, six grenades, five grenade fuse, 63 rounds of 9mm and one transistor. Having been able to dislodge the stacking and recover it into safe custody, a defence spokesperson stated that such recovery of arms, ammunition and other war-like stores have thwarted the nefarious designs of terrorists.

Poonch sector of Jammu and Kashmir has been target zone for militant activities in past, and has often posed threat to peace and harmony of the state. The arms cache recovered from militant hideout in Poonch has brought military under high alert in the region around the confiscated hideout.