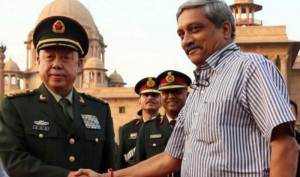 New Delhi : Neighboring countries India and China have agreed to restore peace and harmony on border related issues and refrain from disturbing the tranquil border areas which the two countries share along the line of divide between India and China. This agreement came in as a consequence of talks between Indian Prime Minister Narendra Modi and Chinese President Xi Jinping, which resulted in formulation of a consensus agreement and implementation of it thereby. This is the highest level defence delegation to visit India in the recent years. The visit signifies the enhanced defence exchanges between India and China.

Union Defence Minister Manohar Parrikar and China’s Central Military Commission General Fan Changlong sat together and held a bilateral discussions on border issues and both sides stressed on the importance of maintaining peace and tranquility in border areas for cooperation in diverse areas. As a consequence, the two country representatives arrived at the conclusion of mutually beneficial peaceful ties, joined voices together and agreed to implement consensus reached between Prime Minister Narendra Modi and Chinese President Xi Jinping to ensure peace and tranquility along the border.

Defence Ministry spokesperson Sitanshu Kar tweeted — India and China agree to further enhance communications and exchanges between the two Armed Forces. Defence Minister Parrikar and Chinese General Fan also condemned the recent terrorist attacks in Paris and agreed to strengthen cooperation to fight terrorism. Parrikar went a step ahead and offered to share India’s expertise in fighting terrorism through joint exercises. Both China and India were of the view that peace and tranquility in the India-China border areas is the baseline for smooth development of bilateral relations in diverse areas and restoring peace and harmony in neighborhood ties. Both agreed armed forces from respective side of country call should shoulder important responsibilities for maintenance of peace, which could be more effectively achieved by furthering enhancement in inter-country data sharing and communications getting properly transpired between the two armed forces.

A strategy to put forth additional border personnel meeting points was strongly welcomed by both countries, and together, the two representatives welcomed the operationalisation of additional meeting points for border personnel from both sided of the country fence. An elaborate review of the ongoing exchanges was done, which culminated into mutual satisfaction at the bilateral military exercise from both sides. This stance was further strengthened by the Indian side which welcomed the proposal of scheduling of a visit by Commander of Lanzhou Military region to India early next year. In return, General Fan extended an invitation to Parrikar to visit China. The Defence Minister accepted the invitation and assured proper finalization of a schedule visit, the dates of which would be decided through diplomatic channels.