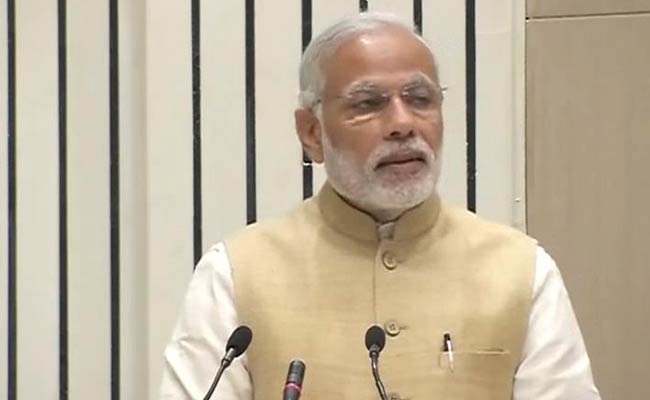 New Delhi : Prime Minister Narendra Modi inaugurated the Delhi Economics Conclave (DEC) a few minutes ago, and expressed his optimistic vision as a leader, in particular, and as a growth-oriented union government in general. The conclave was organised under the aegis of finance Ministry, headed by Finance Minister Arun Jaitley.

PM Modi held on to the keyword ‘Maximum’ and elaborated about the maximum target which the ruling NDA government, under his leadership, has chartered out for the nation on all sectors, with special emphasis on the commerce and economic health of the country. Modi said – For me, JAM (Jan-Dhan Aadhar Mobile) Vision is just about achieving maximum. Maximum value for every rupee spent. Maximum empowerment for our poor. Maximum technology penetration among the masses.’

Summarizing the achievements of his government till date, PM Modi said — By almost every major economic indicator, India is doing better than when we took office 17 months ago. GDP growth is up and inflation is down, foreign investment is up, current account deficit is down. Revenues are up and interest rates are down, fiscal deficit is down and rupee is stable. We embarked on a course of fiscal consolidation. We entered for 1st time into a monetary framework agreement with RBI to curb inflation.

Speaking on the ambitious reform-oriented initiatives of the central government led by BJP, PM Modi said – Reform is that which helps all citizens and especially the poor achieve a better life. It is Sabka Saath Sabka Vikas. Reforming to transform is a marathon not a sprint. What we have done in the last 17 months is to bring one hundred and ninety million people into the banking system.

On a global perspective, PM Modi took cognizance of global financial health of world economies vis-a-vis India and said — World economy is not exactly doing well. This success (of India) is reason of a series of well thought policies. Believe it or not,accounts opened under Jan-Dhan yojana today have a total balance of almost Rs 26000 crores. Our financial inclusion reform has been transformational, Jan-Dhan also transformed ability of poor to make & receive electronic payments. India has (great) entrepreneurial energy. This needs to be harnessed so that we become a nation of job-creators rather than job seekers.

India being a primarily agrarian based economy, Prime Minister made special note of the agri scenario and stated — Agriculture remains India’s mainstream in terms of providing livelihood. We have introduced series of reforms. We are now moving towards universal neem coating of urea. Oil health card tells every farmer condition of soil,enables them to choose right quantity of inputs,greatly reduces wastage of inputs.

Service sector found emphasis in his address when PM Modi spoke at length about labour reforms and other initiatives in the sector. He said — We have introduced a Universal Account Number which will remain with an employee even when he changes jobs (On labour reforms). He added, ‘We have undertaken major managerial improvements in the transport sector.Pace of award of new highway works increased from 5.2 km per day in 2012-13 & 8.7 km per day in 2013-14 to 23.4 km per day currently.’

Refering to the notch up in ranking recently done by the UN, PM Modi said — Our work on ‘Make in India’ and ‘Ease of Doing Business’ is of course well known. The growth rate of trade exceeded GDP growth from 1983 to 2008. We are also taking several steps to serve the honest taxpayer better. We should not limit our idea of reforms to a few standard notions. Our idea of reforms should be inclusive and broad-based.