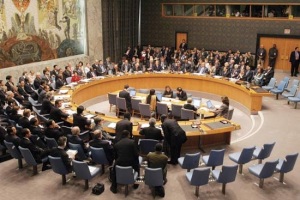 New Delhi : The Head of Security Council reform process replaced ahead of renewed negotiations which are scheduled to take place next month. While the General Assembly has intensified its preparations for deeper level talks on Security Council reforms next month, the Jamaican diplomat who brokered a major breakthrough in the stalled process has been replaced as head of the politically complex negotiations.

The announcement came in when General Assembly President Mogens Lykketoft stated in a letter to permanent representives that Luxembourg’s Permanent Representative Sylvie Lucas would be replacing Jamaica’s Permanent Representative Courtenay Rattray. His letter endorsed the general direction of the negotiating process and encouraged members to continue with it and build on the momentum and progress made in the last General Assembly session. The letter, however, refrained from making any reference of Rattray in particular, who took over as head of the reform process known as the Intergovernmental Negotiations (IGN) last year and broke decades of stalemate to produce a document with which the negotiations could go forward.

Varied opinions have taken shape after this change over. Some opine that this move was done as the Jamaican government had asked Rattray to step down since he was observed to be overextending the nation’s limited diplomatic resources. Another opinion, especially from the active coterie of the region with knowledge of the inner workings of Jamaican politics stated that it was China which played a major role in pressuring Jamaica and prompting it to pull him out of the IGN because of his efficiency in moving the reform process forward. This dimension finds support from Beijing’s stand wherein it had been strongly opposing Security Council reforms which could work in the direction of potentially bringing India and Japan as permanent members.

The Luxembourg Representative Lucas has long experience in the UN system and a knowledge of its working. She has been the permanent representative since 2008 and did a five-year stint as the deputy permanent representative in the 1990s. She has held one of the rotating presidencies of the Security Council when Luxembourg was an elected member in 2013 and 2014 and served as a president of the UN Economic and Social Council (ECOSOC). She has been described often as a tough negotiator and a tireless advocate for issues of women and security.