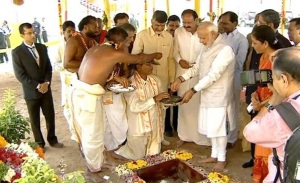 Amravati : In the centre of a grand celebration ceremony, Prime Minister Narendra Modi laid the foundation stone for Amravati, the new capital city of Andhra Pradesh, at a village not far from Guntur. The capital city is a dream project of Chief Minister Chandrababu Naidu, whose TDP-BJP government came to power in state elections last year. Plans have been put in place for construction of state Assembly building, which will come up at the place where the PM laid the foundation stone.

CM Naidu announced that the development work in Amravati would first begin with the roads. He said, ‘If we work with discipline, maintain law and order, adopt good work culture, it will help us reach the goal of making a great capital city with ease.’

Union Ministers M Venkaiah Naidu, Ashok Gajapathi Raju and Nirmala Sitaraman, AP and Telangana Governor E S L Narasimhan and Chief Ministers of AP and Telangana N Chandrababu Naidu and K Chandrasekhar Rao, were among those present on the occasion of ‘Shilanyas’ in the village, about 40 kms from Vijayawada, the commercial hub of the state.

Modi was grandly welcomed by Chief Minister Chandrababu Naidu and others dignitaries. Earlier, Modi went through the exhibition setup by state government explaining the prominence of Amaravati in history 2000 years ago and the present scenario of the capital region.

Modi Congratulated the people and the Andhra Pradesh government for the new capital, and stated that this event was an important step for the state. More than a lakh people attended the foundation stone laying ceremony at Amravati and feasted on the traditional music and dance cultural fervor.

During this visit, Narendra Modi inaugurated the ‘Garuda’ terminal at the Tirupati airport in the presence of Union Ministers M Venkaiah Naidu, Ashok Gajapathi Raju and Nirmala Sitaraman, Andhra Pradesh Governor ESL Narasimhan and Chief Minister N Chandrababu Naidu. The new steel and glass integrated terminal building has been made to handle a huge capacity of 500 domestic and 200 international passengers at a time and has a peak-hour handling capacity of 700 passengers built over an area of 16,500 sq m plus 5,500 sq m of basement.It has 18 check-in-counters, four immigration counters, four baggage conveyors for arrival and one for departure, three baggage claim carousels, two VIP lounges, and parking for 250 cars.

Narendra Modi also visited Tirupati temple shrine, offered prayers at Lord Venkateswara temple and invoked his blessings, expressing confidence that the country would remain peaceful and united.Modi was accorded a traditional welcome amid chanting of Vedic hymns by the high priests, who conducted him to the sanctum sanctorum of the 2000-year old shrine.