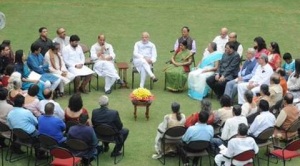 New Delhi : The NDA government ruling the centre took a long standing decision of declassifying of Netaji Subhash Chandra Bose’s secret files as Prime Minister Narendra Modi took the initiative himself and assured the Bose kin in particular, and the country in general, about the government’s determination to do the needful as soon as the turn of this quarter, beginning calendar year 2016, January23rd onwards – this day having special importance as it marks Netaji’s birth anniversary.

PM Modi made this announcement yesterday evening amidst Bose clan, few Modi cabinet members and other invitees at 7 RCR, that the Centre had decided to declassify all the files related to Netaji Subhash Chandra Bose. This came in as a consequence of his meet with 35 members of the Netaji’s family at his 7 Race Course Road residence. Soon after, PM Modi tweeted his decision and expressed his earnestness for declassifying of files, not only in India, but also in countries which have been upholding this information for so many long years. He tweeted – Will also request foreign governments to declassify files on Netaji available with them. Shall begin this with Russia in December. PM Modi has a scheduled visit to Russia in the winters of December, and he promised to talk with the Russian leader personally in getting the files declassified. As per the protocol, the Prime Minister of India has to make a personal request for declassifying of such files to the Premier of concerned countries, following which the needful would get executed.

While family members of Bose family showed enthusiasm and immense satisfaction over the one hour long interactions with the Prime Minister, the PM himself described the interaction with Subhash Chandra Bose’s kin as remarkable and extensive. Modi retierated his opinion about keeping the country’s history properly updated, saying, ‘There is no need to strangle history. Nations that forget their history lack the power to create it.’

The demands for declassification of secret files especially from the family members have been growing lately, especially after the Mamata Banerjee government in West Bengal recently declassified 64 files which were in its possession. The Prime Minister said he finds the suggestions of the family members of Netaji to be similar to his own thinking and the view of the Union government, it said. He also shared with the family members some instances of how he had recalled Netaji during his term as Chief Minister of Gujarat.

The family members of Subhash Chandra Bose welcomed Prime Minister Narendra Modi’s announcement about declassifying secret files related to Netaji and hoped that the historic decision would finally lift the veil over his mysterious disappearance and other surveillance issues.Family members hoped that declassification would give answers to so many theories that have been going around about Bose. Criticizing the previous governments for not taking such a decision, they praised the Prime Minister Modi for his initiative and setting a date deadline for the same, which further confirmed his commitment to declassifying of files.