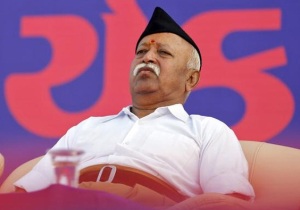 New Delhi : Reservation has gained top position in political score chart and every person who matters in the Indian soci-political scenario is being heard. On one hand, the new roar team called PAAS led by Hardik Patel has been in news on and off, sometimes conducing rallies, sometuimes being detained for the same cause, but most of the times being able to raise a reservation voice.

The recent statement on this context has come from the Numero uno of Rashtriya Swayam Sewak Sangh (RSS), Mohan Bhagwat, who, yesterday expressed his strong views. Bhagwat said that reservation has been used for political ends in the earlier ruling and it was high time that an apolitical committee be setup to examine who needs the facility and for how long.

‘We should have integral approach of welfare for all. It is sensible to realise that my interest lies in larger national interest. Government also has to be sensitive to these issues that there should not be any agitations for them’ Bhagwat stated in his interview with Sangh mouthpiece Organiser and Panchjanya.

He also pitched for constitution of a committee with representatives from the civil society to go into the issue.