Changes taking place in the Arctic will impact the entire world: Barack Obama 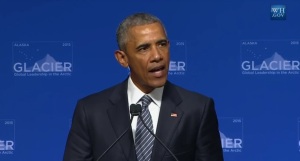 Anchorage, Alaska: Addressing the Glacier Conference here, US President Barack Obama said that the incredible changes taking place in the Arctic will not just impact the nations surrounding it but will have its impact on the entire world as well.

Obama said that the United States is an Arctic nation and is proud to chair the Arctic Council for next two years.