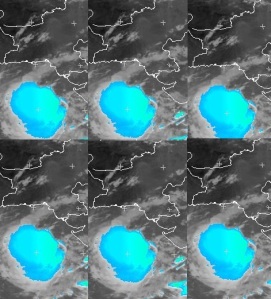 New Delhi : The last week gush of Cyclone Komen in the South Asian region gained storm strength paving its way into the silent lanes of India.

A flash flood today morning in Leh region of Jammu and Kashmir has created havoc in a nearby village resulting in washing away homes and people alike. Drenching the entire affected region, the aftermath resulted in flooding and mudslide, claiming many lives and rendering many shelterless.

Remnants of the Cyclone filled the states of Bengal, Odisha and Manipur due to incessant rains accompanied with heavy wind fury.

As a result of a slow moving monsoon depression over the Bay of Bengal, the inland movement of water strength affected the lives of many, classified as a low pressure depression centered near the border between India and Bangladesh, by the Indian Meteorological Department.

The northeast region of India, particularly village Joumol in Manipur itself witnessed 23 people feared dead after a mudslide the place in concern.

A toll of over 90 people in sereval independent rain-lashes accounts for the rain-hit deaths in the past weeks. More than a  thousand  have been rendered homeless as their shelter-dwellings have been washed away.

Met department has issued heavy rainfall warnings in the states of Manipur, West Bengal and Odisha. Commuting has been badly impacted there because the roads and highways have gotten cut off, and over 30,000 people are in shelters waiting to be resued.