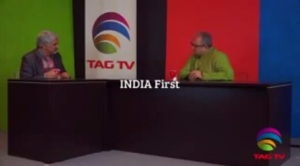 Tarek Fatah, author of “The Hindu is Not My Enemy” CLICK FOR INTERVIEW

Ottawa: A TV interview on India by Tarek Fatah, Pakistan born Canadian author of “The Hindu is Not My Enemy”, has gone viral on social networking platforms.

In his interview to the Canadian Tag TV, Tarek says with a definite punch that “India is poised to become the world’s greatest country.”

Rebuking the Pakistani mentality towards India, Tarek goes on to observe: “The Arabs don’t even spit at us but we go on naming our children after them.’ He quips – Why not Indian or Hindustani names as we did 100 years ago?
Tarek sounds prophetic when he proclaims that India is the future of Human Civilisation. Shaking Pakistan out of its obviously misplaced identity, Tarek asks: “How can you claim to be an Arab because the fact is you are Hindustani since you live on the Indus River.” In the same context, he goes on to add, “This Pakistan cannot understand till it breaks.