Dr. APJ Abdul Kalam: Humility as a mark of Knowledge 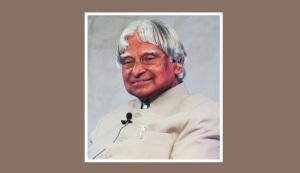 It was a wonderful day for me in Nov. 2009 when Dr Kalam called me over phone to congratulate me on creating “Tiyaaa” (as he pronounced it in his unique Tamil tone). Wonderful because he did not know me, nor did I have anything special about me that was worth knowing. He had come across a copy of the book and was so impressed that he took all the trouble to find out about me and my contact details from M/S HarperCollins, and also from IIM, Indore.
His first words that day were, ‘Swamiji, are you the creator of Tiyaaa?’During the conversation he sounded so elated, and in fact excited, talking about Tiya. He said that he really like the character of the mentor Hans, who was detached all along, and yet concerned about leading Tiya towards freedom. He then asked me what Hans represented, to which I politely replied, ‘Sir, I have left it for the readers to interpret.’ He laughed, and said ‘Hans has to be one’s conscience.’
His laughter and elation was infectious, and it reflected when he topped up the conversation with, ‘Only a beautiful mind can create such a beautiful book’. Embarrassed, I mumbled, ‘Sir, it is your greatness.’
A few days later I received a signed letter from him in which he wrote that “For the first time I have read a great book in the last five years.”
I had followed the progress of Dr Kalam’s career since 1987, when he was still at the DRDO. Even at that time I was impressed by his total commitment towards knowledge, and I felt happy every time I found a mention of his name anywhere for whatever reason.
I saw him only once in 2001 when I was waiting to meet Smt. Maneka Gandhi, Minister of Women and Child Development, in her Secretary’s office. She was in a meeting with some minority leaders, I had been told. When the door opened, Dr Kalam and some other eminent persons came out of the Minister’s office. Seeing me, a monk, Dr Kalam came to meet me with folded hands. The suddenness of the event left me flustered, and I could only somehow utter “I am from Ramakrishna Mission”. He smiled — the smile that seemed to embrace the entire humanity with a heartfelt joy, and spoke a million words of kindness for all.
The sight of that smile and the humility behind his folded hands never left me, and still keeps reminding me of the famous Sanskrit verse, Vidya dadati vinayam – knowledge precedes humility. To be humble is to be divine, and humility comes only when a person is established in some vidya. That is what Dr Kalam was – the beloved child of Goddess of Vidya.
After he had read Tiya, Dr Kalam kept talking about it from various platforms – He wrote a long review of it in the journal of IIM, Indore: http://www.iimidr.ac.in/iimi/images/IMJ/Volume2_Issue3/A.%20P.%20J.%20Abdul%20Kalam.pdf
and mentioned it as one of the must read books in many of his talks, like:http://www.dnaindia.com/entertainment/interview-be-unique-dr-apj-abdul-kalam-to-youth-1639077
He was truly gracious when he concluded his last book Beyond 2020: A Vision forTomorrow’s India, with a quote from Tiya.
When my next book, Param came out in 2012, he wrote to me congratulating me on “bringing out a beautiful creation once again”.
My life’s journey has seen many life threatening upheavals that I faced with the help of all my spiritual training. In those dark moments I also boosted myself up remembering the direct wordsof the great man whose like has not walked on the Indian subcontinent since Mahatma Gandhi.
It was strange that yesterday (27th July 2015) at around 7 PM, I googled “tiya Kalam” to see what all Dr Kalam has said about Tiya. For nearly an hour I lived in the world of Kalam’s Tiya surfing the net and wowing at how he had loved the book. After I had shut down the computer and reached my room, I received an SMS that the great man had passed away.
When I came to know that he had fallen down while delivering talk to IIM students, my instant reaction was “sukhinaH chhatriyAH partha labhante yuudham idrisam” – Sri Krishna tells Arjuna that only a lucky warrior gets a chance to fight and die in a noble war.
Well, that was Dr Kalam – he lived in Vidya, and died while delivering Vidya. An inspiring life, and a more inspiring afterlife