Competition and Regulation are like an “Invisible Hand” working for the society: Narayana Murthy 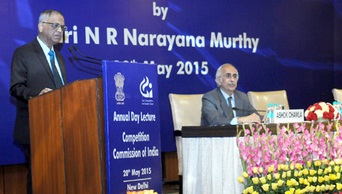 New Delhi: N.R. Narayana Murthy, Founder, Infosys Limited said here on Wednesday that competition and regulation are the two mechanisms that can ensure that the “Invisible Hand” works to the advantage of the society.

Murthy was delivering the Keynote Address at the 6th Annual Day Lecture on ‘Creating a Better India – Musings on Economic Governance Ideas for India’ organised by the Competition Commission of India here today.

Competition brings out the best in any Company and leads to innovation, new ideas, services and products, Murthy said advocating the need for swift and fearless regulatory decisions

Murthy said that trust and confidence in the regulators are important to attract more and more entrepreneurs to start businesses. Within such a system, he indicated five roles the government shoul discharge. These are:

unanimity of conviction and integrity of belief among all political parties that solution to the problem of poverty is through elimination of friction to businesses and entrepreneurs and by creating more jobs; translating this conviction by speedy action to ensure growth of the economy and creation of better jobs; creating an independent and meritocratic judiciary with up-to-date technology, and knowledge of modern, global judicial practices and judgements; introducing transparent and stable taxation policy; and lastly using tax money wisely and efficiently to make life better for the poor by investing in education, healthcare, nutrition and shelter.

The 6thAnnual Day of the Commission marks the notification of the substantive provisions of the Competition Act, 2002.

Earlier in his Welcome Address, Ashok Chawla, Chairperson, Competition Commission of India (CCI) highlighted the various achievements of the Commission in its journey so far. He also spoke of the initiatives undertaken by the Commission for speedy and efficient disposal of cases.