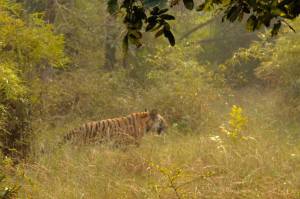 The central Indian State of Madhya Pradesh is presently in the overdrive mode to promote tiger tourism and the proposal to erect a fencing between the core area and the buffer of Bandhavgarh Tiger Reserve at a huge cost, now in the advance stage prior to implementation by the State Ecotourism Development Board, obviously has been approved by the concerned authorities who have failed to take any lesson from the Panna Tiger Reserve where the original tiger population vanished completely by 2009.

Experts had earlier pointed to deaths and injuries to several wild animals due to barbed wire and chain link fence constructed near the Panna Tiger Reserve boundary.

When talking of the complete wipeout of the Panna Tigers, one will have to go back at least 10 years when during the census conducted from March 18 to 24, 2005, the authorities had claimed that 34 tigers and a cub were counted in the Panna Tiger Reserve. The tiger assessment that year had projected 13 tigresses within the territory of a single, monitored tigress. This was a mockery of all that is known about tigers and their habitat, What was most confounding was that those engaged in assessing the tiger count had counted nine adult male tigers and a radio-collared male tiger in the same territory and most of the pugmarks during the tiger count were restricted to this area which was less than 25 per cent of the entire Tiger Reserve. In these circumstances, when the government was projecting 34 tigers in the Panna Tiger Reserve, the experts were not ready to accept any number beyond ten.

The rosy picture painted by the Government regarding the status of Panna Tiger Reserve and the number of tigers in this habitat in 2005 got exposed by 2009 when it was officially accepted that the entire Panna tiger population had vanished.

Those were the most tragic moments for all concerned about the survival of the highly endangered tiger in this part of the world. All Panna tigers had died despite a firm warning issued by the Central Empowered Committee, set up by the Supreme Court, which had issued a stern warning by 2005 asking the concerned authorities to act. The empowered committee’s message was loud and clear that the Panna tigers will vanish if immediate action was not taken for their protection.

An independent report “The Missing Tigers of Panna” circulated in 2005 by Raghunandan Singh Chundawat, an expert on Panna tigers, had categorically pointed out that tiger population was continuously on the decline. It also gave a loud warning by pointing out that within a short period – between 2002-2005 – there was no trace of about 30 tigers, including four of the six that had been radio collared and were covered by him in a field study.

A sequel to “The Missing Tigers of Panna” was the hard hitting report “Panna’s Last Tiger” published in 2009 by the Wildlife and Conservation Trust known as BAAVAN (bagh aap aur van – Tiger, you and forest) also recounted the factors responsible for the doom of the Panna tigers during the period 2001-2005 when the management changed hands and there was a shift in priority from protection and monitoring to tourism.

The report pointed out how in April 2002, the new management started tiger shows and the elephants were no longer available for patrolling nor for research: tourism was given higher priority.

The report also talked of:

• Felling, uprooting and burning of thousands of trees along the roads apparently to create view line for tourists.

• Extensive burning of forest and damage caused by this activity to some of the important wildlife habitat.

• Quarrying and removal of sandstone blocks for departmental construction work causing extensive damage to river beds in core areas of the park.

• Damage to wildlife habitat by elephant. Opening up of forest cover by pulling down large number of mature trees by the riding elephants used for tourist and building elephant camp near an important tiger habitat.

Today the Panna Tiger Reserve is being projected as a huge success story when it comes to repopulating the habitat. In a recent communication (in the first fortnight of March this year), Panna Tiger Reserve Director Sreenivasa Murthy had told Newsroom24x7 that the number of tigers in Panna had gone up to 26 following the arrival of 3 more cubs born to T6 – the tigress brought from Pench Tiger Reserve in January 2014 as part of the Panna Tiger reintroduction Project that was launched in 2009.

The Panna field personnel have shared their experience and narrated how on a number of occasions, they have had to chase and bring back tigers that went beyond the buffer and even as far as Lalitpur near Jhansi in Uttar Pradesh.

On December 26, 2009, T3–a male tiger, relocated from Pench, that had wondered away from the park area, was located, tranquilised and brought back by the Panna team 30 days after the big cat had travelled almost 442 kilometres through Chhatarpur, Sagar and Damoh districts and was heading towards Pench – his original habitat.

The Panna success story notwithstanding, inquiries have revealed that special teams are continuously deputed and at least one diesel 4-wheel vehicle is engaged round-the-clock to chase and keep track of each radio-collared tiger in Panna TR to ensure the tigers remain safe. Due to biotic pressure, especially in the buffer area, Panna TR is facing acute shortage of both water and prey base. It is due to this reason, the tigers are forced to leave the park area and they go a long distance, even till Lalitpur in Jhansi-Uttar Pradesh, in search of food and water. Wildlife authorities in the state have started saying that now it is not the wild herbivores but cattle that is the normal prey base for tigers. Under these circumstances, tigers have been chased tranquilised and brought back to the park after they have crossed over to the other side. Therefore, it will not be an exaggeration to conclude that the tigers of Panna, more or less, are being bred in controlled conditions. Unfortunately the focus has shifted to maintaining the numbers of tigers in the Tiger Reserves and not towards ensuring they breed and thrive in their natural habitat which obviously includes the tiger reserves, buffers, the forest corridors and also the notified forest areas.Only once the natural habitat is adequately protected, we can think of conserving the biotic pyramid with the Tiger at its apex. Only then we can have living forests, i.e, forests that have the ability to regenerate. Only then ground water will be recharged to the maximum and the rivers will be perennial.

If the Madhya Pradesh authorities refuse to take any lesson, Bandhavgarh will also go the Panna way. Between January and August last year, 12 tiger deaths were reported in Madhya Pradesh and 7 of these were reported from Bandhavgarh Tiger Reserve. Last year in August, a tiger, popularly called “Kankati’, was found dead near a rivulet behind the M.P. Tourism Development Corporation Hotel near the Tala Gate. March-end this year, a 6-month-old male tiger was found dead caught up in a snare set up by poachers in a farmhouse adjoining the Bandhavgarh Tiger Reserve. This property belongs to Rajendra Singh, the deputy Speaker of Madhya Pradesh Assembly.