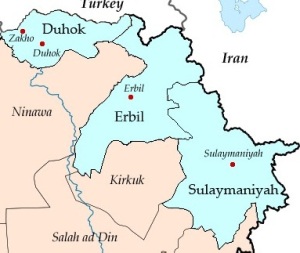 Washington DC: A vehicle-borne improvised explosive device was detonated directly outside an entry point on the perimeter of the U.S. consulate in Erbil in Iraq on Friday at 10:44 a.m. Eastern time when the duck and cover protocol was activated at the U.S. consulate.

Host nation fire assets responded to extinguish the fire, Ms. Harf said adding local authorities have also responded and were securing the area. Appreciating the ‘rapid response of the Kurdistan Regional Government authorities to this matter’, she said the US will work with them to investigate the incident to determine the facts behind the explosion.

Ms. Harf emphasised that there’s already a high level of security at the consulate, at the US embassy in Baghdad and said the latest explosion in Iraq is something that the US would take as very serious.

I think that Iraq remains a dangerous place – many parts of it do. So I’m not going to get into specifics, but we know that the security environment there is quite a challenging one and obviously take a number of security precautions when it comes to our people and our facilities. – Marie Harf, Acting Spokesperson, US Department of State

Ms. Harf also stated that the United States is deeply concerned that Chinese journalist Gao Yu has been convicted and sentenced to seven years in prison after a closed trial on charges of leaking state secrets to a foreign news outlet. The conviction of this veteran journalist, she pointed out, is part of a disturbing pattern of government action against public interest lawyers, internet activists, journalists, religious leaders, and others who peacefully question official Chinese policies and actions. We call on the Chinese authorities to release Ms. Gao immediately and to respect China’s international human rights commitments.

On Syrian President Assad’s denial of the Human Rights Watch reports about his use of chemical weapons in some cities in Syria lately, the US spokesperson said: These…latest denials of his are really not credible, sort of bordered on delusion. We have a lot of evidence about what’s happening here, not just in this most recent attack, but certainly before that. Ms. Harf went on to emphasise that the US is looking very closely, particularly into the latest one and considering next steps. There’s an investigation ongoing.

When asked about the allegations about the use of ammonium chloride, which is available on the open market everyone, Ms.Harf said Chlorine could be used, in a variety of ways. It can be used as a chemical weapon. In the past, she said, the Organisation for the Prohibition of Chemical Weapons (OPCW) has determined that this was delivered from helicopters. It has also been stated the past that only the Syrian military possesses the capability to use helicopters in such attacks.

Ms. Harf went on to assert that it’s the Assad regime that bears the overwhelming responsibility for the humanitarian disaster in Syria and in the region, and Assad often presents this false choice between his regime and terrorist groups like ISIL. And that’s certainly not how the US sees it. She refused to give credence to his comments – pointing to ‘his actions over the last many, many months’.