Materialistic progress has no meaning without spirituality: Vasudev Maharaj

Bhopal: Sadguru Jaggi Vasudev Maharaj today emphasised that materiastic progress has no meaning without spirituality. Unless every individual has peace of mind, we cannot think of world peace, he observed.

Sadguru was addressing the opening session of the 3-day international seminar on “value based life” organised at the Vidhan Sabha auditorium in the state capital by the Madhya Pradesh Culture Department as part of a series of workshops and seminars to be held ahead of the Simhastha Mahakumbh at Ujjain next year. He said that Simhastha Mahakumbh-2016 will lead to spiritual awakening.

Sadguru was all praise for Madhya Pradesh chief minister Shivraj Singh Chouhan. He said that under the imaginative leadership of the Chief Minister, these events will give an ideological dimension to Simhastha Mahakumbh. The session was presided over by the Chief Minister.

Sadguru lauded the state chief minister for the initiative being taken for spiritual awakening while paying full attention towards ensuring economic growth. He also talked of the unprecedented agriculture growth in the state. Urging all to participate in Simhastha-2016, he said that attending the Simhastha festival should not be just a ritual but it must be treated as a spiritual experience.

Sadguru said that India would be known as the most value-based country in the world 25 years from now. India alone can offer solutions to the problems the world is confronting today. He Said that being born as a human being is in itself an important event and the objective of human life should be attaining the capabilities to serve the larger human interests. He said that the soil of India is unique. ‘Bhav, raga and tala’ form India. While Raga is fixed, we have the option to select the tala (rythm). He said that life is a form of Karma. A human being performs actions – physical, mental, and emotional – but without being conscientious. He said that Dharma means the rules that govern and discipline inner-self and (human) nature.

Answering queries from the audience, Sadguru said that there is a cacophony in India. Everyone is free to do anything, but every person is peace-loving by nature and this is the true identity of India. 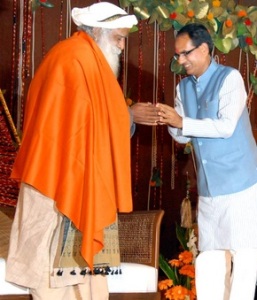 The chief minister underscored the purpose behind the seminar and said that it is a humble effort on the part of the state government to revive the tradition of discourse and discussion for human awakening. He described the event as “ideological Mahakumbh”. Solutions to contemporary problems will be presented through the “Simhastha Declaration”, he said adding that it would offer solutions to global problems.

The chief minister said that apart from materialistic progress, all governments should work towards raising the happiness index. Throwing light on the seminal idea behind the present seminar, he said that values are getting eroded in all walks of life. Life is meaningless without values.

Former Chief Minister Kailash Joshi, Minister of State for Culture Surendra Patwa, members of the State Cabinet and distinguished citizens were present on the occasion.