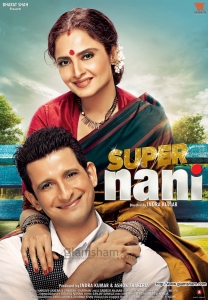 Mumbai: Zee Cinema will present the World Television Premier of Super Nani, starring gorgeous and timeless diva Rekha in the title role in, on April 11, at 9 p.m.

Super Nani is a family entertainer by Indra Kumar. It is a social satire that follows the life of a lovely grandmother transforming herself to gain her lost respect within her own family.

The film also stars yesteryear hero Randhir Kapoor and features Sharman Joshi and Anupam Kher in key roles. Based on a Gujarati play ‘Baa AeMaari Boundary’, the movie is centered on a doting, committed housewife Bharti (Rekha) whose selfish husband (Randhir Kapoor) and grown-up children treat her only as a doormat, her life alters when her New York raised grandson Mann (Sharman Joshi) urges her to reinvent herself to regain her confidence and self-esteem. With this new-found support, Bharti channelises the fashion-model in her. One must see the film to know whether or not Bharti’s family will accept her in this new avatar?

High on comic quotient, Super Nani is a wonderful story that not only entertains but also helps in realizing the importance of women in our lives. It is a universal story and an ode to womanhood. Being a homemaker is challenging for any woman yet she remains the most unappreciated even when it comes to he own family. The film highlights the fact that women are the backbone and that they need to be valued and loved. – Ruchir Tiwari, Deputy Business Head, Hindi Movie Channels, ZEEL