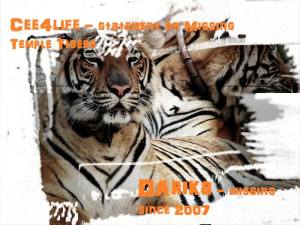 This news is based on Cee4life statement regarding the raids and confiscations of illegally kept animals on the premises of Tiger Temple at Kanchanaburi in Thailand, followed by the further recent revelations of the Tiger Temple Veterinarian of 15 years regarding the disappearance of 3 Tigers, Dao Nau, Facram 3 and Happy 2.

The founder of Cee4life and renowned wildlife expert Sybelle Foxcroft has said in  statement  that her organisation fully supports the actions of the Department of National Parks, Wildlife and Plant Conservation (DNP) Thailand and will assist in all areas related to this case to the best of our ability.

Cee4life states that the abuse and disappearance of Tigers from within the Tiger Temple has been occurring since the start of the Tiger Temples inception as a tourism business operation in 1999.  This has been proven repeatedly via evidence collected over an 8 year period by Cee4life.

In this time, multiple Tigers have disappeared and these disappearances were always witnessed by Temple staff workers, Monks, the dealer/trader of the Tiger Temple and some Volunteers.

The nature of the procurement and disappearances of the Tigers from the Tiger Temple was solidly confirmed after a pain staking and sometimes dangerous investigation, resulting in the following:

1. It is confirmed that the original 8 Tigers were illegally obtained by the Tiger Temple and were not orphaned Tigers.

2. The Tiger Temple was been involved in the wildlife trade of protected endangered Tigers in cross border trades with Laos, effectively breaching wildlife laws of Thailand and the CITES agreement.  However, for reasons unknown, at that time the evidence was not followed up.

3. The Tigers were being physically abused in multiple ways

4. The Tigers were not being cared for at an ethical standard and were void of correct enclosures, correct diet, correct enrichment, correct and timely veterinary aid.

5. The safety of the public was/is at high risk

It is from the animal ethics and welfare and wildlife law stance that Cee4life continued to carry out an intricate and complex 8 year continuous investigation into the Tiger Temple in pursuit of the safety for the lawfully protected listed endangered Panthera tigris sub-species of the Tiger Temple.

After the recent resignation of the Tiger Temple Veterinarian of 15 years, this long term professional employee came forward with information regarding three Tigers which have disappeared from the Temple grounds between 20 – 25th December 2014.  We commend the Veterinarian for coming forward with this evidence and information.

The three tigers are named Facram (number 3), Happy (number 2) and Dao Nau.  Tiger Temple has had a habit of renaming tigers or naming multiple tigers the same names in order to confuse. It does not matter how much confusion ensues, a Tigers stripes are the same as DNA and do not change.

Due to the grave concerns for the safety of these Tigers, Cee4life urges for all of the Tigers of the Tiger Temple be completely confiscated and for the Tiger Temple never to be allowed to house any CITES listed protected, endangered species, or animal species used in traditional Chinese medicines (animal body part use) again.

Cee4life also urges that all venues offering hands on touching of Apex predator carnivores cease these programs on the grounds of animal ethics and welfare and safety to the public.  Cee4life urges that ethical and humane management be implemented  for all species in a captive environment to enable these life forms to live free from harm for life.

Along with the three recently named missing Tigers (Facram 3, Dao Nua and Happy 2) we respectfully and humbly ask that the DNP investigate the disappearances of multiple other Tigers that vanished since the start of the Tiger Temple, and that those responsible for these crimes to be dealt with at the highest standards of justice for a criminal in Thailand.

The following Tigers are only a few which have vanished from the Tiger Temple between 1999 – present day:

Isirah – Disappeared 2010, was female and was taken away for months, was returned as a male.

The above listed Tigers are only a few of the Tigers that have been confirmed as “missing”. We urge for a criminal investigation and legal justice for these Tigers that paid with their lives at the hands of greed.

It is estimated that the Tiger Temple has had over 400+ Tigers inside their grounds.  The breeding of cubs increased rapidly as “cub” petting programs were implemented and new cubs born every few weeks/months to multiple mothers to supply the Temple with ongoing tourist cubs.  As of today, 5th April 2015, the Tiger Temple has approximately 147 Tigers on their premises. It begs the question, “Where are the multiple missing Tigers?”

Cubs in these petting programs are kept until the age of approximately 3 months old before being replaced by new infant cubs. To keep this number of cubs available to the public, a massive over breeding regime was implemented, which has seen female adult Tigers forced into early breeding cycles repeatedly, the removal of their cubs between 7 – 12 days, in effect destroying their bodies, and providing cubs for tourism. At any point in time, 6 – 20, twelve day old– 3 month cubs were/have been available to the public all year round resulting in numerous Tigers born, yet many suspected as not recorded and then “disappearing”.

Cee4life has urged for the confiscation of all Tigers from the Tiger Temple and for Tiger Temple to receive a lifetime ban on owning or housing any CITES listed protected species, or any animal who’s body parts are used in traditional Chinese medicines.