Judiciary should be empowered and capable to play its divine role: Narendra Modi 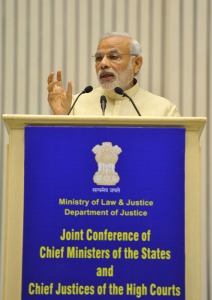 New Delhi: India’s Prime Minister Narendra Modi today said the Judiciary should be both “Sashakt” and “Samarth” (empowered and capable) to play its “divine role” of ensuring the rule of law, and delivering justice to the common man.

Addressing the Joint Conference of Chief Justices of States and Chief Justices of High Courts, the Prime Minister said that while the executive is under constant assessment and scrutiny in public life, through various institutions, the Judiciary normally does not face any such scrutiny. He said the Judiciary has built up an enormous faith and reputation among the people of India, and should evolve its own in-built systems for self-assessment, so that it can live up to the high expectations placed on it by the people.

The Prime Minister, said good infrastructure for the Judiciary was a priority for the Government, and an amount of Rs. 9749 crore had been earmarked for strengthening the Judiciary under the 14th FINANCE Commission. He said that under the Digital India Programme, technology should be deployed to bring about a qualititative change in the Judiciary. He stressed that quality manpower was required for the Judiciary. He was as concerned about the Human Resource, as he was about the physical infrastructure, the Prime Minister added.

Without going into the details of pendency in litigation and corruption in the Judiciary, the Prime Minister hoped that this forum would suggest some fresh approaches to deal with these issues. He said Lok Adalats were an effective way of dispensing justice for the common man, and this mechanism should be strengthened further. Similarly, he stressed the importance of “Family Courts.” He also called for a comprehensive review of the system of Government-appointed Tribunals, to assess their efficacy and effectiveness.

The Prime Minister said laws are sometimes not drafted well, and therefore lead to multiple interpretations. He said there should be minimum grey areas, and therefore, drafting of laws requires special attention. He said he is committed to removal of obsolete laws.

He stressed the need to prepare for emerging areas of litigation such as maritime law and cyber crime. He said acquaintance with forensic science is now a must for those associated with the legal profession.

In his welcome address Union Minister of Law and Justice D.V. Sadananda Gowda said Indian judiciary has played a key role in upholding the fundamental rights of the citizens as enshrined in our Constitution. However, ensuring justice to a population of over 1.2 billion people is a herculean task. It is more so in a developing economy with vast geographic, cultural and socioeconomic diversity. This makes it all the more important for State Governments and High Courts to work jointly towards the effective administration of justice. The Minister said our judicial system is under strain today due to 3 crore cases pending across the courts in the country. Increasing the number of courts and judges at all levels is the first step towards achieving timely delivery of justice. Development of good judicial infrastructure is another priority area. By creating a favourable working environment for judges, lawyers and litigants, we can make justice more easily accessible to everyone. The Central Government has been releasing funds for this purpose through a centrally sponsored scheme for infrastructure development and has just completed the first Phase of an ambitious eCourts Project for ICT enablement of courts.

Gowda said that these initiatives have resulted in availability of more court halls than functional courts in the country; another 2500 court rooms are under construction. The e Courts Project has already computerised more than 13000 district and subordinate courts. Data relating to 4.4 crore cases in these courts is available for the lawyers and litigants to access through the district court website at their convenience. Looking at the positive experiences from these initiatives, He called upon all the Chief Ministers and Chief Justices of High Courts to recruit more judges and staff and provide manpower and extend financial support for maintenance of this ICT infrastructure.

Gowda said Government has taken many steps to popularize alternate dispute resolution (ADR). More than Rs 350 crore has been released under the 13th Finance Commission to set up ADR Centres and train mediators. About Rs 140 crore has been released for training of Judicial Officers, and another about Rs 68 crore for training of public prosecutors. We hope to amend the Arbitration and Conciliation Act, 1996 soon to make the arbitration process more investor-friendly, cost effective and suitable for expeditious disposal of cases. Our goal is to make India a hub of international commercial arbitration, the minister said. Shri Gowda said he has written to all the High Courts and State Governments asking them for their views on the recommendation of the Law Commission for enactment of an enabling law to be used for the timely and effective resolution of commercial disputes.

In his presidential address Chief Justice of India Justice H.L.Dattu hoped that today’s dialogue between the Judiciary and the Executive will find deep and firm roots in the bond of trust, faith , which is shared between these two institutions.

The Chief Justice said the ultimate goal of all of us is to serve the people of India upholding the letter and spirit of the Constitution. We are bound by the constitutional values and principles of Democracy and it is our sacrosanct duty to uphold them. Our sacred Constitution draws its force and its authority from the people of India, but it places the onus and the duty of protecting these citizens on the three pillars of Democracy- the Legislature, the Executive, and the Judiciary, the Chief Justice of India asserted.

Justice Dattu said social evolution, economic progress and development of the nation raise new challenges and present opportunities for all institutions. Issues concerning the administration of justice are complex and cannot be addressed by the Judiciary alone. The Executive has just as much at stake and the Judiciary must work with the Executive as equal partners in this extremely important mission, he added.

Justice Dattu said as judges are guardians of the rule of law and the Executive has an equally important role in facilitating a rule of law society. He said, it is in the highest traditions of democratic governance that two branches of the State- the Judiciary and the Executive have come together to communicate directly with each other. He said the very heart of the justice administration in this country, which cannot be solved by the judiciary alone as it requires the active cooperation and assistance of the Executive. The issue of pendency requires efforts on multiple fronts from multiple agencies to effectively address this issue. Above all, it requires tremendous investment in developing appropriate infrastructure for the judiciary, police, prosecution agencies etc. Shri Dattu said Supreme Court and the various High Courts have been taking a wide range of measures to address pendency and this can be seen in the reduction of the pendency in the Supreme Court in the last few months and the effective lok adalat measures that have been taken across the nation. To further intensify these efforts, Arrears Committees are being constituted in every High Court to develop a strategy to clear backlog of cases that is relevant to local contexts. He said we have been able to address the long pending matters pertaining to Land Acquisition, Direct Tax cases, Criminal cases and Service matters.

The Chief Justice reffered to the Judiciary and the Parliament as siblings- the children of Democracy and said we are obligated on one hand to support one another, and on the other hand correct the other if they sway from the path laid down by our sacred Constitution. He also stressed on ensuring the best minds to adorn the Bench and vouched for attractive re-numeration as in future if youth does not see this Judiciary as a financially viable career option, it may choose to stay away from the same. If one were to simply compare the salary and perks of sitting Judges in India to any other modern Democracy, or even compare the same to that of fresh graduates in Indian Law Firms, the stark reality would be evident. He said this would cause the greatest hindrance in attracting the competent youth towards the Judiciary.