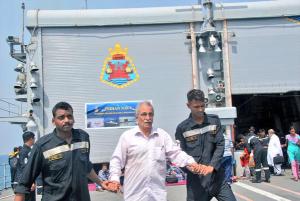 State-wise numbers’ of those evacuated from Yemen and have returned to India was released last night. Today another about 800 were evacuated.

Till 9 PM (IST) on Saturday, INS Mumbai was the refuge for about 370 Indians off the coast of Aden and evacuation was still underway, according to Akbaruddin.

All Indians from Sana’a to Djibouti feft for home. AI 777 left Djibouti for Kochi with 322 passengers in the morning.

State-centric information:List of Indians evacuated from Yemen according to States they indicated (released Friday night)