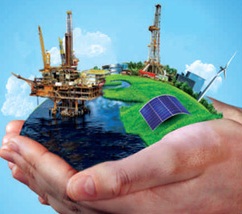 New Delhi: Highlighting the import dependence of the nation, Prime Minister Narendra Modi has emphasized the need for working together to achieve energy security of the country and urged all stakeholders to increase the domestic production of Oil and Gas to reduce import dependence from 77 % to 67% by the year 2022, when India celebrates its 75 years of independence, which he called as “Amrit Parv”.

The Prime Minister was inaugurating ‘Urja Sangam 2015’ at Vigyan Bhavan in the capital on Friday. This is India’s biggest global hydrocarbon meet, aimed at shaping the country’s energy security.

Modi said that by achieving the target of domestic production fo oil, the citizens would pay a true homage to our freedom fighters who sacrificed their lives for the sake of the country. He further said that import dependence should be brought down to 50 % by the year 2030.

He said that the western part of the country is having more economic activities whereas the eastern parts of the country have to be focused for development as eastern states are rich in natural resources. For National growth a balance growth of every state and each part of the Country is required.

Focusing on achieving equitable and balanced national growth, he said that the Government is committed to expanding its National gas grid network from its current length of 15,000 kms pipeline to 30,000 kms cross country gas pipeline. The said move would help connect Eastern states with the rest of the country which will boost industrial development. Modi also called for growing Jhatropa in non-agriculture and barren lands, which could be used for production of bio-diesel. He also emphasized the need to promote skill development in important trades to ensure development. There are ample opportunities for innovation in the energy sector that need to be explored, added Prime Minister.

The Prime Minister lauded execution of world’s largest cash transfer LPG subsidy scheme PAHAL in a time bound manner. Talking of its remarkable success, he stated that cash benefits 12,000 crore were made available to customers within a span of just 100 days, arresting leakage and bringing transparency.

Speaking on the occasion Minister of State for Petroleum & Natural Gas Dharmendra Pradhan talked about the initiatives the government has taken under the leadership of the Prime Minister. He emphasized the role of Petroleum companies in the national economy and underscored the need of Energy Security of the country. He also complimented OVL, EIL and Indian Oil’s Barauni Refinery for their 50 years of dedicated service to the nation.

Later, speaking at a Ministerial Session on ‘Framing Energy Security – Sustainability & Responsible Energy Investments, Nirmala Sitharaman said that India currently has 99 trillion cubic feet of shale gas reserves and 800 MMT of oil reserves, and that it has the potential to produce 20 million CUM of gas by 2020. She also added that India has created storage space for strategic oil reserves of 5.33 million tonnes at three locations. She also stressed on the fact that solar power needs lot of innovative interventions. At the valedictory session, Finance Minister Arun Jaitley said that the focus should be on oil and gas exploration to reduce oil import. He also added that the government is also trying to explore long term financing mechanism for infrastructure projects.

Urja Sangam aims to showcase India’s potential in the hydrocarbon sector to the world and create an investor-friendly atmosphere, besides positioning India’s thought leadership by creating a new “Energy Security” platform. On the global level, the summit aims to firm up cooperation agreements with key global players.