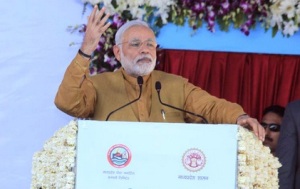 Prime Minister Narendra Modi speaking at a special function to mark the dedication to the nation of Stage 1 of Shree Singaji Thermal Power Plant at Khandwa and the foundation laying ceremony of the second phase of this project on March 5, 2015.

The Prime Minister made a strong appeal to Members of Rajya Sabha, cutting across party lines, to support the Union Government to fulfill the people’s mandate for development. He also made a passionate appeal to farmers and said they should not to be misled by those who were trying to project the Government`s initiatives for development, as “anti-farmer.”

Modi was addressing a large gathering of farmers and people from the rural areas, at a function to mark the dedication of Stage-1 (2x600MW) and the laying of Foundation Stone of Stage-2 (2x660MW) of Shree Singaji Thermal Power Project, at Khandwa in Madhya Pradesh.

The Prime Minister drew attention to the large gathering of people from rural areas despite the festival of Holi and said it shows how committed people are towards the cause of development.

The Prime Minister described energy as the key to development. the Prime Minister said power generation has gone up by about 11 per cent in the last 9 to 10 months, since the new Government assumed office.

The Prime Minister emphasized the importance of saving energy, and threw spotlight on the Government`s programme of LED bulbs for homes and street-lighting.

Modi said that his Government is committed to curbing corruption, and gave the example of successful auctioning of coal blocks, which would also benefit Madhya Pradesh in a big way. 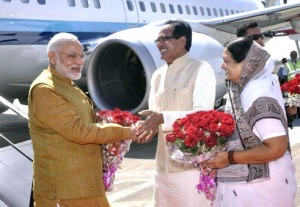 Madhya Pradesh Chief Minister Shivraj Singh Chouhan, and the Union Minister of State (IC) for Power Piyush Goyal were present on the occasion.