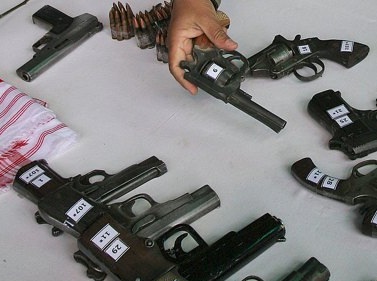 Two, including a woman, arrested, 900 cartridges and 2 sophisticated firearms seized

New Delhi: A team of Special Cell of Delhi Police, led by Inspector Govind Sharma, has achieved a major breakthrough by busting a syndicate engaged in illegal arms supply and meeting the ‘package needs’ of trigger happy criminals in and around the Delhi national capital region (NCR), Bihar, Uttar Pradesh and Madhya Pradesh.

A team of Special Cell, which has done extensive work on manufacturers and peddlers of high quality firearms in Munger district of Bihar and the Sikligar community of Khargone and Khandwa districts in Madhya Pradesh, was trying to find an answer to the question from where these people were getting the “corresponding cartridges” and what was their modus operandi to procure the ammunition. It is obvious that the criminals need both firearms as well as relevant bullets and cartridges. Those from the Sikligar community engaged in manufacturing illicit firearms have their hideouts, which are often caves in the forest area. Many of them have been arrested in the past but the illegal arms manufacturing activity continues as the knowledge and expertise of manufacturing firearms runs within families.

During the course of investigation, the Police had started receiving information that a criminal syndicate of some persons from Bihar, Western Uttar Pradesh and Madhya Pradesh were involved in some kind of barter trade by exchanging firearms with cartridges to enable them to supply of ‘loaded weapons’ to the criminals. Relevant inputs received from the arrested criminals and peddlers were collated and surveillance was mounted to identify and nab members of this syndicate.

On February 23, police received information that a module of this syndicate, comprising of a man and a woman, would be arriving at the Anand Vihar Inter-state bus terminus (ISBT) to carry out their gun and cartridge peddling activity. The police team swung into action early in the afternoon and nabebd the two suspected accused Mohd. Rabbani (35)  of Bakarpur village in Munger, Bihar and his accomplice Chunni Beghum (30), also a resident of Bakarpur. They were arrested immediately as they came out of the ISBT. A search of the bags they were carrying led to the seizure of 2 sophisticated pistols and a total of 900 Ordnance Factory made 7.65 mm cartridges concealed in their clothing. A case under the Arms Act has been registered against both of them.

Their interrogation has revealed that their Inter-State syndicate follows a unique modus operandi. The firearms manufactured in Munger (Bihar) are traded for cartridges sourced from dubious sources by collectors based in a few districts of Madhya Pradesh. The peddlers from one end of the syndicate carry firearms with them. These are delivered to peddlers coming from the other end of the syndicate who carry cartridges with them for delivery to the gun peddlers. At the end of teh chain, a pistol with cartridges are sold to the criminals at a high profit.

The gun peddlers in this case followed the unique strategy and plan. They roped in female operative to accompany a male peddler while travelling from Munger as a male-female combination was least likely to create an alert or suspicion about their motive. The female members also helped in splitting the illicit cargo and were better placed when it came to ensuring a cursory check at the boarding and de-boarding points.

Interrogation of the arrested accused has revealed that the syndicate functions strictly on a ‘need to know’ basis and all instructions are given by their respective handlers only after a particular part of the journey has been successfully completed and reported. They have revealed the ‘ends’ of this syndicate are engaged in this activity.

Police have informed that sustained raids are being conducted to apprehend the gun manufacturers and peddlers and the sources engaged in mass pilferage of prohibited Ordnance cartridges.

One of the accused arrested Mohd. Rabbani has done schooling till the tenth at his native village. He initially worked at manual stone crushing, construction and road laying sites. A local peddler Mohd. Tehsaam puled him into the illicit gun running business. Tehsaam used to take Rabbani as a co-passenger while smuggling firearms into western UP and Delhi and he was paid on commission basis. Gradually, the accused came in contact with other peddlers from Munger who used to ferry firearms parts from Munger to Western UP. and thereafter, along with associates based in certain West UP Districts, used to assemble the parts for onward sale and supply. Gradually, he rose the ranks working with different syndicates. Later he landedup in the present syndicate which is involved in a higher level of criminal activity.

Chunni Beghum is a widow and is engaged in vegetable selling business. she got associated with Rabbani and both of them started carrying firearms from Munger and used to return with cartridges received from the other end of the syndicate.