David Saperstein is US Ambassador-at-Large for Religious Freedom 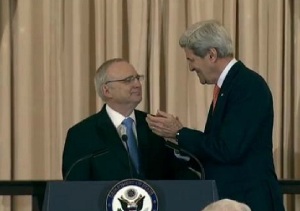 Washington DC: At a special function to mark David Saperstien’s swearing in as US Ambassador-at-Large on Friday, US Secretary of State John Kerry stated since the days of Thomas Jefferson, religious freedom has been at the absolute center of American values and an essential component of US foreign policy, and it is especially relevant right now for all of the obvious and tragic reasons.

For Religious Freedom, Kerry said, Saperstein is President Obama’s and his chief adviser. Recalling how the two of them have worked together, the Secretary said: “Together we got behind the CHIPS legislation for children’s health care. We pushed for the proposed Workplace Religious Freedom Act, which unfortunately never passed. We were partners in the struggle to help veterans who had been affected by Agent Orange. And we have been allies in trying to awaken the world to the dangers of climate change – and let me just say that when it comes to the fundamental health of Earth, folks, we’d better stick to the Creator’s original plan, because there is no Planet B.”

Kerry said: “Our generation prides itself on its modernity, and yet we are still grappling with rivalries that have their roots in the distant past. Today, thousands of people are in prison because of their religious practices or beliefs. In the Central African Republic, Christian and Muslim militias are engaged in a bloody conflict. In Burma, radical Buddhists are seeking to deny citizenship to an Islamic minority. In the Middle East and Africa, terror networks such as Daesh and Boko Haram are betraying fundamental principles of their own religion of Islam. Major European cities are struggling to cope with the aftermath of terror attacks, amid evidence of anti-Semitism, radicalization, Islamophobia. Our own country has mourned the loss of journalists – earlier this month the death of a young woman who said she saw God in the eyes of the suffering and who dedicated her life to helping others – and lost hers for doing so.”
It’s certainly the case that when we look at what violent extremists are up to around the globe – the killings, the rapes, the slavery, the bigotry, the destruction of religious sites – we all feel an unbelievable, deep sense of horror, a sense of being dragged back somehow centuries, diverted from the path that we all aspire to for the 21st century. But the horror that we witness should not make us stupid. The terrorists may scream from the roof tops that their crimes are God’s will; but you can’t frame God for what thugs do. This is a kind of criminal anarchy that we are witnessing. Any idiot can murder a human being, but there isn’t a sword sharp enough to destroy truth.

Saperstein spent four decades, as Director of the Religious Action Center for Reform Judaism. He is one of America’s leading voices on behalf of social justice in its dimensions. He served on the boards of the NAACP, the National Religious Partnership on the Environment, the World Bank’s “World Faith Development Dialogue”. He was also the first chair of the U.S. Commission on International Religious Freedom and in 2009 was appointed by President Obama to the White House Council on Faith-Based and Neighborhood Partnerships.

Before the swearing-in, Saperstein went to Canada to meet with his counterpart there. He’s been part of the presidential delegation already for the 70th anniversary of the liberation of Auschwitz, and he just returned from Iraq, where religious issues are intimately connected to one of the top priorities on the entire international agenda of the US.

It will not be enough for us to mourn victims of religious persecution or even to condemn the traducers of faith who murder in its name. That just-concluded summit dramatizes America’s role in actualizing, facilitating, coordinating, mobilizing, shaping effective responses, even while learning from the best practices across the globe. And the Inter-Religious Freedom office, the IRF office, must play a key role in this effort.- David Saperstein

Taking up the new responsibility Saperstein said: “I cannot remain silent. When we see historic Christian, Yezidi, other communities in Iraq, from which I have just returned, in Syria being devastated; when we see Baha’is in Iran, Tibetan Buddhists in China, Shia Muslims in Saudi Arabia and Pakistan, Rohingya Muslims in Burma, all victims of governmental or societal discrimination, harassment, persecution, physical attacks, sexual violence, enslavement – even in Western Europe we are witnessing a steady increase in anti-Muslim acts and rhetoric and anti-Semitic discourse and acts of desecration and violence against Jewish individuals, synagogues, and institutions and communities that we thought we would never, never see again after World War II.

Sadly, Saperstein said, this list is far from exhaustive, but shows a broad range of serious threats to religious freedom and religious communities in nearly every corner of the globe. According to the Pew Forum, he pointed out, 75 percent of the world’s population lives in countries where religious freedom remains seriously limited and many religious minorities face persecution, intimidation, and harassment. Most vividly, the whole world has witnessed the tragic, violent attacks by ISIL, known as Daesh, against peoples of many faiths – most recently the tragic, tragic targeting of Egyptian Copts in Libya. Even as we must respond to this specific crisis, we will win the battle of freedom only when our long-term goal must be to ensure the internationally recognized right to religious freedom for everyone and every group. It is an urgent task and the needs are great.