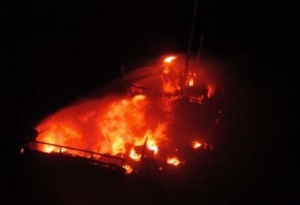 New Delhi: The reported statement by a Coast Guard Deputy Inspector General that he had ordered a suspected terror boat to be blown up, which contradicts the Indian Government’s claim that the boat had blown itself up, has raised a huge controversy directly linked to national security.

The Coast Guard officer in question DIG B.K. Loshali has been issued a show cause notice for his statement made to the media.

Defence Minister Manohar Parrikar Wednesday told journalists that the Defence Ministry stands by what it had stated earlier about this incident. “At the most you are making a case of inquiry against the official for making that statement”, he added.

Indian Defence Ministry in january said in a statement “As per the intelligence inputs received on December 31, a fishing boat from Keti Bunder near Karachi was planning some illicit transaction in Arabian Sea…Based on the input, Coast Guard Dornier aircraft undertook sea – air coordinated search and located the suspect fishing boat.”
The official version all along has been that the boat had blown itself up after being intercepted by Indian Coast Guard.