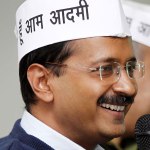 New Delhi, Feb. 10: Today it is celebration time for all at the Aam Aadmi Party headquarters in Delhi. A huge crowd also kept waiting to congratulate AAP leader Arvind Kejriwal in front of his residence at Kausambi in Gaziabad right through the day.

Kejriwal will be sworn-in as chief minister of Delhi on February 14–exactly a year after quitting office.

The core of all activity shifted this afternoon to Constitution Club where the winning MLAs of AAP will be meeting at 5 pm. AAp’s tally of seats rose to 67 (wins and leads) against only 3 of the BJP this afternoon. The Congress, BSP and others have drawn a blank.

Leaders of different political parties have taken AAP’s resounding victory as a huge opportunity to hit out at the BJP. West Bengal; chief minister Mamata Banerjee said the arrogant BJP leadership has been taught a lesson.

On Aam Aadmi Party’s massive victory, Shiv Sena chief Uddhav Thackeray said: “Tsunami is bigger than any wave.” In a message obviously directed at the BJP, following its wipeout in Delhi, he said: “do not take voters for granted.”