Need to harness opportunities in the social media for Enhanced outreach: Arun Jaitley

Union Minister for Finance, Corporate Affairs and Information & Broadcasting Arun Jaitley addressing at the inaugural session of the workshop on streamlining government communication, in New Delhi on February 02

New Delhi, Feb. 2: Minister for Finance, Corporate Affairs, and Information and Broadcasting, Arun Jaitley today said in the new communication landscape, the future belonged to digital media due to its reach, scale, variety and accessibility.

Mr. Jaitley made this observationtoday while inaugurating the Workshop on ‘Streamlining Government Communication’ organized at the National Media Centre here by Press Information Bureau under the aegis of the Ministry of Information & Broadcasting.

Mr. Jaitley said technological thrust also impacted the nature of information dissemination in view of changes taking place globally across platforms. These rapid changes had led to a convergence of technological touch points in the media space, impacting the nature and flow of information dissemination. Elaborating further, Mr.Jaitley said the nature and character of news dissemination had undergone change due to the challenges thrown by 24×7 television consistently. The camera today had become the prime mover for defining content and setting the agenda, thereby impacting the flow of news.

Regarding the packaging of Government information, the Minister emphasized that Government Departments needed to optimally utilize their websites to place accurate and credible information. The website platforms were an important medium to address concerns of stakeholders who required information related to the policies and initiatives of the Government. The content of the website needed to be in a language which was easy to read and understand. Each Ministry also needed to cultivate the mechanism of reaching out to those stakeholders who constituted the wider assembly of people including representatives of the people/civil society, etc. Mr. Jaitley also referred to the need to utilize different tools available in the social media space i.e. Twitter, Blog, Facebook to enhance the reach of Government communication. During the course of the address, the Minister also mentioned that the media needed to take a comprehensive view of the decision making process while highlighting the decisions taken by the Government.

In his remarks to the participants, Minister of State, Col. Rajyavardhan Singh Rathore said that the current communication perspective was driven by speed, accuracy, brevity and clarity of thought. It was imperative to utilize new tools of communication for enhancing outreach to a wide range of stakeholders. Perception management had also become a critical tool in the communication paradigm and needed to be addressed in totality. 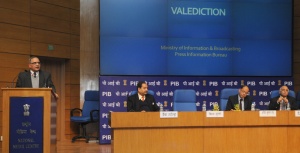 In his opening remarks, Secretary Information and Broadcasting (I&B),Bimal Julka gave an overview of the efforts being made by the Ministry of I&B to position the communication approaches of the Government. Mr.Julka outlined the key initiatives undertaken by the Ministry to address the new challenges in the context of adopting a 360 degree approach, integrated media planning and initiatives undertaken in the social media space. Shri Julka also outlined the specific initiatives undertaken for Swachh Bharat Mission, Beti Bachao, Beti Padhao and PM’s Jan Dhan Yojana along with efforts of the Ministry in addressing the crisis situation. Emphasizing the need of integrating the IEC component within proposals for consideration and approval, the Secretary called upon the participants to formulate the Cabinet proposals wherein the IEC component was an inbuilt part of the said proposal. This would enhance the communication efforts and address the budgetary requirements.