US condemns terrorist attacks in Egypt 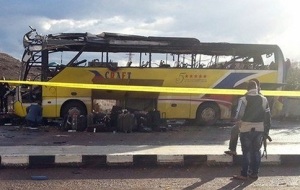 Washington DC, Jan. 30: The United States has strongly condemned the latest terrorist attacks in Egypt’s North Sinai Governorate in which at least twenty nine Egyptian citizens were killed and dozens others wounded.

In the first major outburst of violence after the main militant Islamist group active in the Sinai region came out openly in support of the ISIL, security facilities were attacked by terrorists last night

Jen Psaki, US Department of State Spokesperson has issued a statement on behalf of the US Government expressing sincere condolences to the victims, their families, and the government and people of Egypt.

The statement goes on to add, a prosperous and strong Egypt requires an environment of security and stability, and the United States remains steadfast in its support of the Egyptian government’s efforts to combat the threat of terrorism in Egypt as part of our continuing commitment to the strategic partnership between our two countries.