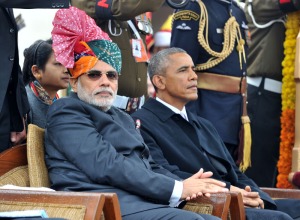 There is nothing to read between the lines in the statements by US President Barack Obama and Indian Prime Minister Nrandra Modi in New Delhi on the eve of India’s Republic Day. The message is loud and clear for the entire world. India and the US under the leadership of Prime Minister Narendra Modi and President Barack Obama have chosen to march forward leaving behind the cloak or the shadow of doubt. The two leaders have bridged the trust deficit by reaching out to balance the concerns, and divergent stands of both nations on crucial issues.

Underlining the spirit and commitment for a strong relationship between India and the US Prime Minister Modi said in his statement at the end of bilateral talks in New Delhi on January 25: “The promise and potential of this relationship had never been in doubt. This is a natural global partnership. It has become even more relevant in the digital age. It is needed even more in our world for far-reaching changes and widespread turmoil. The success of this partnership is important for our progress and for advancing peace, stability and prosperity around the world.”

From the turn of the century, Mr. Modi said in his statement, we had begun transforming our relationship, but we have to convert a good start into lasting progress. This requires translating our vision into sustained action and concrete achievements.

Mr. Obama responded in equal measure by stating: “As two great democracies, two innovative economies, two societies dedicated to the empowerment of our people — including millions of Indian-Americans — we are natural partners.”

The US President said that Mr. Modi’s election — and his strong personal commitment to the India-U.S. relationship — gives us opportunity to further energize these efforts.”Many of you know, in New York, the Prime Minister appeared in Madison Square Garden and was greeted like a Bollywood star, he said adding, I think, (this was) a signal of the deep friendship between our peoples as well as our close ties that we are working to expand even further.”

Today, Mr. Obama said, we achieved a breakthrough understanding on two issues that were holding up our ability to advance our civil nuclear cooperation, and we’re committed to moving towards full implementation.We agreed to deepen our defense and security cooperation. We’ve renewed the framework that guides our defense cooperation for another 10 years. And in a major step forward for our relationship, our Defense Technology and Trade Initiative will allow us to jointly develop and produce new defense technologies. We’ve also agreed to a new vision for the Asia Pacific so that we’re doing more together to advance our shared security and prosperity in this critical region.