Raising the Justice Agenda at WEF 2015 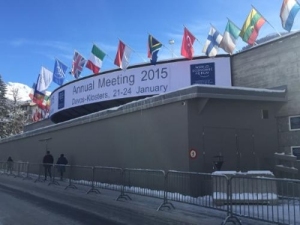 DAVOS, Switzerland, Jan. 22: Gary Haugen, President and CEO of International Justice Mission is meeting with thought leaders from around the world at the 2015 World Economic Forum in Davos, Switzerland in order to raise the profile of the justice agenda among participants, and emphasize the importance of including a justice element in the new Sustainable Development Goals (SDGs).

“Combatting everyday violence against the poor is of critical importance if we want to win the global fight against poverty,” said Haugen. “When the poor aren’t safeguarded from violence by the basic benefit of law enforcement, not only are individuals and families robbed of their freedom and cut off from basic needs, but the broader work of development is severely undermined.”

Haugen is a member of the WEF Global Agenda Council on Justice, which aims to improve the delivery of justice in a nation-based justice system, particularly in countries with weak public justice systems. The Council also works to identify emerging and innovative mechanisms and technologies to assist countries with weak legal systems in order to enhance the rule of law and deliver justice to its people.

The 2014 World Economic Forum marked the launch of Haugen’s latest book, The Locust Effect: Why the End of Poverty Requires the End of Violence. The book which garnered endorsements by WEF founder Klaus Schwab, President Bill Clinton, Professor Muhammad Yunus and other thought leaders, paints a bleak picture of how the hidden plague of everyday violence against the poor–including gender violence, forced labor, land theft, and human trafficking–is one of the most urgent issues facing the developing world today.

“It’s not going to be possible to end poverty until we end violence,” Haugen explained. “If we share this great global dream of ending poverty we have to understand that everyday violence is pulling the rug out from underneath about 2 billion of the world’s poorest.”

This year, the post-2015 UN development agenda will be solidified in the SDGs. In December, 2014, Secretary-General Ban Ki-moon released a report called “The Road to Dignity by 2030: Ending Poverty, Transforming All Lives and Protecting the Planet,” where he outlined justice as an essential element to include on the agenda. Over 11k supporters have signed IJM’s petition, asking that protection for the poor from violence be incorporated in the SDGs.