Prime Minister Narendra Modi came to power with the vision to make India a global manufacturing hub. He spelt out his priority in crystal clear terms when he invited global players from the ramparts of Red Fort on Independence Day by raising the slogan–“Come Make in India”. The Prime Minister has given himself the mandate to woo investors and this he has demonstrated in large measure by talking directly to the NRIs across the globe from the US to Australia and interacting one-on-one with world leaders in quick succession.

During the final years of former Prime Minister Manmohan Singh led UPA-2, economists had started talking of a weak rupee and a cross-section had even started wondering whether or not the weak currency would lead to a crisis as it had happened in 1991 July when the rupee fell by more than 30 per cent against the US dollar making it difficult for India to meet its foreign debt commitments. 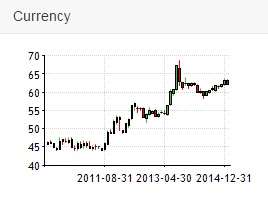 The rupee has once more hit a record low and there has been a big current account deficit (CAD) that widened to 2.1 per cent of GDP in the last fiscal’s second quarter due to sluggish growth in exports after the Modi Government came to power. The current account deficit figures for the October-December quarter are still awaited. Recession in Japan and sluggish euro-zone have also cast a shadow on demand for Indian goods and in the prevailing scenario what has come to the rescue of Mr. Modi is the declining oil prices. Since the trend relating to oil prices is expected to continue, India should find itself comfortable with the current account deficit–especially if a good volume of FDI gets channelized to India in the near future and in the domestic sphere the Government’s reform measures on GST, labour and land acquisition laws start moving on track.

The corresponding provisional inflation rates for rural and urban areas for December of 2014 are 4.71 percent and 5.32 percent. Mr Modi can hope to retain his popularity if prices continue to remain stable and inflation remains under control. But when we see inflation rate going doing, we cannot throw caution to the wind as this could lead to recession. Even in a recession prices stay constant or rise slowly as demand for products and services do not rise.Consequently, consumer price index dips. In periods of excessive recession, prices can actually fall leading to deflation. The caution notwithstanding, a Citigroup report says; “stable CAD and slowing inflation are likely to be Indian rupee supportive. While there could be occasional bouts of emerging market volatility, the adequate foreign currency reserves and long forward position built by RBI is likely to help contain the volatility.”

India has recorded trade deficits right through 1980 onward mainly due to the high growth of imports, particularly of crude oil, gold and silver. In recent years, the biggest trade deficits were recorded with China, Saudi Arab, Iraq, Switzerland and Kuwait. India records trade surpluses with US, Singapore, Germany, Netherlands and United Kingdom.

The wholesale price index (WPI) has been the main measure of inflation in India but in 2013, Reserve Bank of India Governor Raghuram Rajan chose to opt for the consumer price index (CPI) as a better measure of inflation. In India, in the top bracket of the consumer price index is food, beverages and tobacco (49.7 percent of total weight). Fuel and light accounts for 9.5 percent; Housing for 9.8 percent; Transport and communication for 7.6 percent; Medical care for 5.7 percent; Clothing, bedding and footwear for 4.7 percent and education for 3.4 percent.

The CPI inflation increased for the first time in a period of five months to 5 percent in December of 2014 from a record-low of 4.38 percent the previous month and it was driven by higher food prices. In real terms, the cost of food and beverages rose 5 percent, from a 3.5 percent increase in November, according to provisional estimates. The forecast for CPI is that it would marginally rise from 144 in the first quarter of 2015 to 147 in the second quarter but inflation rate is likely to dip further from 3.8 in first quarter to 2.59 in the second quarter and if the trend continues it should touch 0.03 per cent by 2020.

Cost of fuel and light went up 3.41 percent in December, up from 3.27 percent in November and cost of clothing and footwear went down to 6.51 percent from 6.97 percent in the previous month. More significantly, year-on-year, petrol prices fell by 9.96 percent and cost of diesel decreased 2.97 percent. 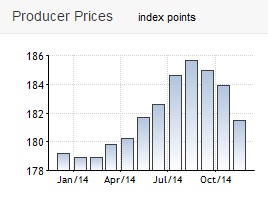 India’s GDP advanced faster than expected 5.3 percent in the third quarter of 2014, yet below 5.7 percent reported from April to June. The expansion was dragged down by weaker manufacturing while services growth remained strong.In the third quarter of 2014 (July-August-September), the highest growth rates were reported for: community, social and personal services (9.6 percent) and financing, insurance, real estate and business services (9.5 percent).